Plans to allow a demonstration by controversial environmental pressure group Extinction Rebellion to go ahead this morning in Birmingham have come in for criticism by the Conservative opposition on the city council.

The group, who have stage several similar protests in recent weeks, plan to demonstrate on Bristol Road at the junction of Lee Bank/Belgrave Middleway from 7am to 10am. 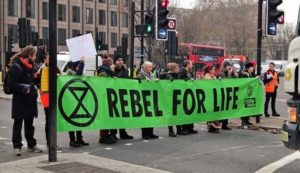 Leader of the Birmingham Conservative Group Cllr Robert Alden said “While it is vital that we take action to protect our environment and limit climate change it is unacceptable for a main road into the city to be closed off by protesters, especially during rush hour.

“It is also hugely counter productive; the road has many key public transport routes running along it which will now mean users are unable to get the bus to work and it is a key route to the hospital.”

He added, “This kind of protest against people trying to go work is unacceptable and not welcome here in Birmingham. It doesn’t help move forward the debate on climate change – it actually makes it harder and leads to far more pollution being created through congestion during protests”.

“It is disgraceful that the city council and the West Midlands Police Commissioner have allowed this protest. Labour have let down residents of Birmingham by sanctioning this level of disruption during rush hour“.