I could’ve made a long weekend of it but the cost was high enough without extending two days into four, so I set out for the first time on the second Bank Holiday weekend of May down the M40 to that there London. Full of big time Charlies, mouthy Charlottes, John Cleese-baiting foreign types and most importantly for me, Roger Hodgson, erstwhile Supertramp leading light and Aston Villa, erstwhile Premier League also-rans. Yes, London suddenly became an unusually desirable destination for this parochial Brummie.

It’s difficult to imagine a more unfashionable band than Supertramp. Very much a band of the seventies, even at their height there was something a bit twee about them, a bit oh so clever that rendered any declaration of admiration a tricky task if you wanted to keep you street cred. They were a student band for students who thought Genesis were a bit too raucous.

But they had tunes, and in abundance, so when Hodgson came to England I couldn’t resist the temptation, electing to push the boat out when the nation’s capital emerged as the only destination this time around and with the Royal Albert Hall playing host I was to visit two legendary and iconic venues in a matter of days. 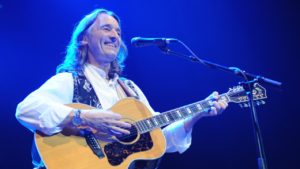 Hodgson produced the poppier, more melodic side of Supertramps music, preferable to my sensibilities than the earthier, jazz-infused compositions of co-member Rick Davis, now unable to tour due to ill health. Backed by a talented four piece band, it was Supertramp in all but name and save for a couple of solo tunes, the set spanning most of Hodgson’s time in the band.

The hits were evenly spaced out allowing breathing room for the more expansive songs from the catalogue, the highlight being the set closer Fools Overture, a song I’ve longed to hear in a live setting and from my lofty perch in the Gallery I couldn’t have chosen a more suitable view. Like the music, it was breathtaking, panoramic and highly memorable.

Although a British native, Roger Hodgson decamped to the States many years ago, and this is not only reflected in his accent but also his between song patter which is cloying and sentimental at times, but thankfully remains the right side of cringeworthy. He fulfilled a personal highlight when clambering up behind the stage to play the venue’s magnificent organ, adding a unique touch to Say Goodbye, a rare track from his solo oeuvre.

But it was the more familiar tunes that had the audience on their feet, none more so than the final cut. It might be a bit obvious but singing along to “It’s Raining Again” while watching a good proportion of the audience brandishing brollies was tremendous fun. In fact the whole gig had a bright, optimistic air and as the host asked us to early on in the show, we left our troubles outside for a while.