The Member of Parliament for Birmingham Edgbaston, Preet Kaur Gill, facilitated a meeting on Tuesday between local headteachers and the Schools Minister, Nick Gibb MP, in order to discuss their serious concerns regarding school funding.

Four headteachers and one governor representing primary and secondary schools from Preet Gill’s constituency attended the hour long meeting with the Schools Minister. In the meeting, the Minister told headteachers present that there will be a less than 1% increase to budgets for Birmingham schools. Nick Gibb did, however, commit to make a strong case to the Treasury about the specific needs of schools in Birmingham and encouraged those schools and individuals who felt that the current funding formula was disadvantaging communities to make representations to his department. He acknowledged that this is “the darkest hour” for many schools and that he hoped that the policies they have put in place will make future cuts “more gentle”. 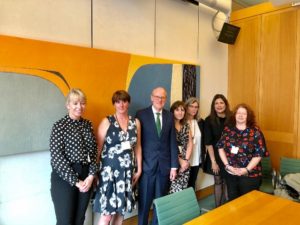 During the meeting, Michele Shevels, Headteacher at Kitwell Primary School, said: “While the needs of our children and families are increasing, external support and help is becoming harder and harder to afford and more and more difficult to access.”

Emma Johnson, Executive Principal at Oasis Academy, added: “Schools are increasingly becoming a social hub for family’s needs as outside services have their budgets cut.”

Jane Gotschel, Headteacher at Lordswood Girls’ School, commented: “The recent funding cuts following on from the Coalition’s removal of Specialist school funding and changes to the way school sixth forms are funded create additional pressures for high-performing 11-18 schools. It was encouraging that the Minister recognised that his government has not protected post-16 funding.”

Preet Gill said: “A promised rise of less than 1% to school budgets will not allow them to cover the rise in pension costs, national insurance, the annual teachers’ salary rise or the increase in bills. Many schools have told me that they have already slashed all additional spending and some will struggle to remain open for 5 full days a week if the cuts continue.

“The cuts to school budgets have meant that children are not getting the same opportunities or support to achieve their potential as ten years ago. These funding cuts are ripping through our education system from nursery right the way through to post-16 provision. School funding in its current form is simply not sustainable.”

The meeting was set-up following on from Preet Gill’s survey of all headteachers in Bartley Green, Edgbaston, Harborne and Quinton which exposed a number of areas of concern about the negative impact that budget cuts are having on education locally.

The survey revealed that 82% of schools who responded had had their school budget cut in real terms for the current academic year and 88% were pessimistic about their funding over the next three years. Further to this, one quarter of surveyed Edgbaston schools have had to make cuts to their SEN support and over half have had to cut spending on books and other essentials in response to the funding cuts they face.

Out of the 371 schools in Birmingham a staggering 365 face cuts with an average loss of £350 per pupil. In total, Birmingham schools have missed out on £147.9 million between 2015-19 – the amount needed to protect per pupil funding in real terms.