With the Birmingham Parks team at Cofton Nursery winning yet another Gold Medal at the Chelsea Flower Show with their entry highlighting the positive and essential role of plant life in removing toxins from the air, the Conservative Group have welcomed parallels with their own air quality plans that were ejected by the Labour administration, and called on them to finally start taking the proven scientific benefits of green infrastructure seriously in the city.

Birmingham Labour refused to introduce green walls and other infrastructure in ourcCity, especially at air pollution hot spots. At the local elections in 2018 the Conservative Group proposed the largest roll out of green infrastructure any UK city would have ever seen (picture of artist impression of what the Aston Expressway would look like with green walls from the Conservative Group Manifesto and Clean Air Plan). 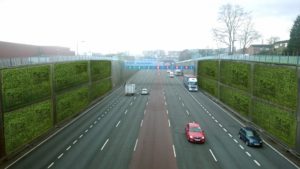 Leader of the Opposition Conservative Group, Robert Alden (Con, Erdington) said: “The City Council’s parks team have a hugely successful track record in the Chelsea Flower Show and are a source of great pride for the city, this year they have continued that tradition with yet more Gold success, a fantastic achievement. The City Council should try to emulate that achievement by striving for Gold class air quality for our residents.”

By showcasing green infrastructure alongside roads, and beautified canal towpaths, the model garden shares many similarities with ideas put forward in our own manifesto and air quality plan for cleaning the air, which the Labour Group rejected in favour of taxing vehicles to travel into the city centre, instead of the Conservative Clean Air Plan which actually delivered cleaner air and continued improvement of our air quality.

“We know from all the research that Green Infrastructure can remove up to 40% of the pollutants in the air around it. Rolling this across the city would actually deliver clean air, unlike Labour’s Travel Tax that even they admit won’t achieve compliance in time and hurts the least well off the most. I hope that this latest award for this great team will inspire the Birmingham Labour administration to finally start taking these technologies seriously.”

With a wider theme of environmental improvement, including reducing waste, Councillor Alden believes that this year’s design is particularly well timed, commenting: “We have been campaigning to improve our environment calling for greater action to reduce and reverse the damage humans are doing to the planet and to the health and economic prospects of future generations, the garden design powerfully conveys the importance of that message and the technology the Council could introduce to deliver these improvements.”