A Midlands rising star who graduated in music industries with flying colours is celebrating further academic and professional success.

Tanyel Gumushan, a former Birmingham City University student who achieved a first from Birmingham School of Media in 2017, was crowned the UK Music Outstanding MAP Graduate Award at the Creative and Cultural Skills Awards hosted by the National Museum, Wales earlier this week.

The Leicester-based music professional was put forward for the prestigious title by Birmingham City University Degree Leader and Senior Lecturer in Music Industries Matt Grimes, who praised Tanyel’s work ethic following the award win. “I nominated Tanyel for the award following her work whilst on the music industries course here at the Birmingham School of Media, and more importantly her work outside the course. Tanyel threw herself in to the industry, writing for a number of publications such as NME, tmrw, Clash and DIY. It’s fair to say Tanyel was a model student, embracing academia as well as industry practice, achieving a first in both her dissertation and final project.” 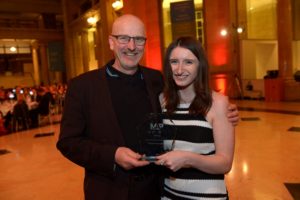 Tanyel’s final year project, Band-On, focussed on improving access for under-18s to live music – providing a solution to a licencing issue which many venues and local authorities across the UK struggle with.

Oliver Morris, Director of Education and Skills at UK Music, the umbrella organisation which represents the collective interests of the UK’s commercial music industry and who sponsors the MAP Graduate award, spoke highly of Tanyel’s achievements, saying, “The judges were really impressed with Tanyel’s proactive and dedicated approach to her study and development of her career outside of university. She is an exciting young professional with boundless energy who has had the talent and vision to pursue her multiple musical passions very successfully.

The Outstanding MAP Graduate Awards seek to highlight the amazing talent coming into the industry as well as the fantastic work being done by UK Music’s Music Academic Partnership members such as the University’s School of Media. The support of lecturers such as Matt Grimes is key to helping make sure the Talent Pipeline – so vital to the success of the music industry – continues to grow in strength. Tanyel is a really exciting young talent and the amazing quality of nominees at the OMGs bodes well for the future of our exciting industry.”

Following her graduation, Tanyel was successful in securing a position as a Live Music Adviser for licensing and royalty body PPL-PRS at their new base in Leicester, offering an opportunity for her to put the skills and knowledge acquired during her time at Birmingham City University into practice.

Tanyel thanked UK Music and Matt Grimes for the recognition: “I was extremely honoured to be nominated against such amazing talent from music graduates across the UK. To take home the award is a privilege, and it feels great to have had my work both in and out of the office be recognised. It has made me even more excited for the future!”