Sixty years ago, on 3rd February 1959, rock’n’roll – and the world – lost its brightest star. The unparalleled catalogue of music that Buddy Holly left behind has entertained, inspired and moved every subsequent generation to laughter, tears and an irrepressible desire to dance.

To commemorate Buddy’s anniversary and to celebrate the joy he has brought millions of people worldwide, the country’s first and best-loved Buddy Holly act, Buddy Holly and the Cricketers, plays a very special show in venues all over the UK, beginning in Walsall at the Forest Arts Centre on Friday 1st February.

Producer Simon Fielder of Simon Fielder Productions, a former actor in the original touring and West End show said: “I’m so lucky to present shows that feature people and subjects about which I am really passionate. Buddy Holly was pivotal in my development as a guitarist and songwriter. Buddy’s music has touched the heart of millions 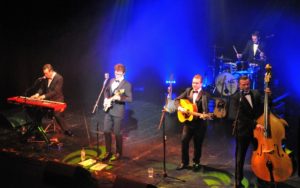 around the world and influenced many famous artists such as the Beatles, the Rolling Stones, Eric Clapton, Brian May and many others. This year is especially poignant and will be a show to remember.”

Buddy Holly and The Cricketers is a dynamic show featuring authentic arrangements, driving rhythms, energetic performances and skilled musicianship that has audiences dancing in the aisles. It has been delighting audiences for 26 years and has performed in many locations around the world including Europe and a tour of the US.

The show stars some of the finest actor-musicians in the UK including Jason Shaw as Buddy and was endorsed as Britain’s most popular Buddy Holly act when the show appeared on BBC One’s The One and Only, with Graham Norton notably commenting that they were “Buddy Brilliant.”

The show has always presented Buddy in the style of show we feel he would perform today. Authentic arrangements, driving rhythms, energetic performances and wonderful musicianship, all delivered with charm and humour.

For more information and a list of tour dates and venues go to www.simonfielder.com.