Head back for a moment, to the first summer that never ended amidst the blast of a heatwave.

That year saw Graham Parker releasing his first two albums, Howlin’ Wind and the aptly named Heat Treatment. Roll it forward to 2018, another summer of heatwave, and GP is back with the new Cloud Symbols studio album and a tour to match it. In the gap between the two, Graham Parker’s been on the road with The Rumour, The Shots, The Figgs, The Rumour again, and now with The Goldtops and the Rumour Brass. And solo. The guy’s a grafter. And a mightly fine act too. 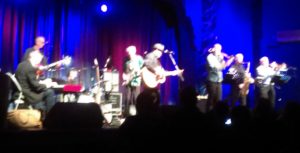 Originally described as an angry young man, Parker has lost nothing of his ability to narrow in on issues and eviscerate them fully. Just give a listen to Snake Oil Capital Of The World from Three Chords Good. Now he’s out on the road again to promote Cloud Symbols, with longstanding band member Martin Belmont alongside him, plus the Rumour Brass who were last sighted with GP around 1977.

The Leamington Assembly’s a fine venue, being a former Regency ballroom, complete with domed ceiling, and the distant ghosts of tea dances past. Taking to the stage with a bluesy version of the New York Shuffle, the band produced a lengthy set, making this surely the best value for money gig ever with 22 songs on the setlist. Added to which you get a few Parker anecdotes, always mixing laughs into the evening. Backdoor Love, for example, had Parker admitting that it was not nearly as naughty as listeners might have thought, being simply the tale of an affair. Crowd pleasing Hotel Chambermaid preceded the arrival of the Rumour Brass for White Honey.

With such an extensive back catalogue, it’s natural that fans will miss some favourites in any Graham Parker set. After all, you can’t expect the guy to play for days. But I was happy to find the swing of Silly Thing on this setlist, and the tongue-in-cheek Lady Doctor, curing ills for free over several decades now. There was more too from Cloud Symbols, in the best way not standing out from the set as new material, but more as GP songs that you couldn’t quite put your finger on yet. Hold Back The Night ended the set.

There are encores, and there are mini sets, which GP delivered over five songs of extensive encore. We got Love Gets You Twisted from a solo GP, then The Goldtops back for the gentle Maida Hill from Cloud Symbols and Martin Belmont’s Rockin’ Hawk, an instrumental needing a swinging sixties groovy London film to pick it up as a soundtrack. Finally the horns sneaked back out for Heat Treatment and Soul Shoes. It was 1976 all over again. And in a really good way.