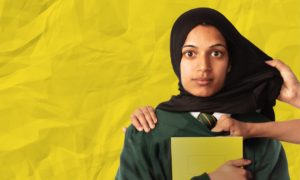 Well,  the one thing you can say about the Edinburgh Festival and Fringe which ends this weekend is….WHOOSH!

There must be a billion things going on in the streets, clubs, theatres, bars, church basements, garrets and, probably, inside garbage cans and the back of a Renault. It is truly overwhelming and the best thing is to close your eyes lie back and think of Albania.

A stand out is Trojan Horse by Birmingham actor/writer Helen Monks, which lays bare the anger, Islamophobia and fear when the government decided to investigate whether there’d been a conservative hardline Muslim  takeover of some city schools earlier this decade.

Monks and co-writer Matt Woodhead used 200 hours of taped interviews to develop the story that ends with most of us not sure what and what did not happen. Was there a conspiracy by teachers and governors to install Muslim culture in the classrooms?

Or was it smoke, mirrors and cultural paranoid hatred of a minority? To be fair, the play does descend at times into hectoring polemic.  But the innate stupidity and crass racism of national officials and politicians to point an accusative finger with a jerk of a knee and then have the school staff muster their strength to prove their innocence is an overwhelming indictment of how British race issues bubble, boil and explode. 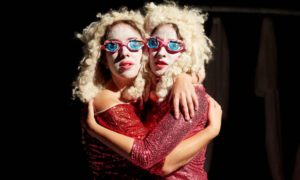 In the same theatre, but happily at a different time is Dollywould, a gay deconstruction of La Parton.

The gloriously named Sh!t Theatre boils down Dolly’s overt sexuality to show how beneath the rhinestones and campiness, the country singer is a smart woman laughing all the way to the bank. And, in a way, they also show how the singer and Edinburgh’s own eponymous Dolly the DNA sheep both share a certain quirky place in culture about how they are perceived by a public and media quick to judge and point a finger.

And in their own whacko way, the female gay couple that entail the madcap Sh!t Theatre make a billion truly libellous claims about how Parton walks the bisexual lineas they snoop into her private life. Strip out the rhinestones, the rococo figure and the wigs, they say, and you have a dynamic and strong woman successfully taking on the world.

Lots of other stuff too. Some falls flat, such as Dominic Frisbee’s Financial Game show (he’s a bit coin expert). It’s more of a fact-strewn stage than a comedy act but I did learn that the Festival pockets the third biggest gross when it comes to worldwide entertainment extravaganzas (name the other two and win a free year-long subscription to this site).

Meandering through Edinburgh’s sunny streets (a rare experience…) and getting past the muddy footprints of big stars and comics, I usually find it’s the smaller stuff that gets top billing for me. This year it was a re-working of Ovid’s Metamorphoses, a collection of tales that mix sexuality, philosophy, transformation and fables to define the Latin world. 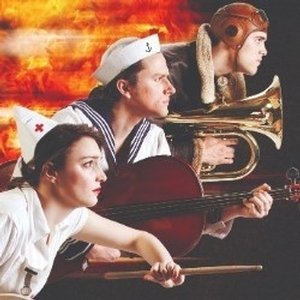 Author Peter Bramley places the re-write during the London blitz to summon up Ovid’s overwhelming concern that humankind was out to wage permanent war and destroy itself and the planet (and that was 2,000 years ago). The theatre company Pants on Fire creates part music revue, part comic skit-fest to capture the Roman view of the beginning of the universe, its changes, its sex mad gods, pansexual hunks, and lovestricken heroes descending into hell (the London Underground, of course) to find the soul of a departed lover.

The cast of seven, who all take turns on the piano, transform into a galaxy of classical characters: a cocktail sipping Narcissus, a trio of nightclub crooners as The Chorus; a puppet Cupid whose arrows of passion are borne by unseen hands, a forlorn Echo as an usherette who can  only copy the last words of a video hero on a projection screen.

It’s a beautifully crafted play about love and loss and the enduring gift of hope and all to the tune of music, broad comedy, slapstick, dance and song.