Approval from the many for Brummie legends.

UB40 previously endorsed Corbyn’s successful Labour leadership re-election campaign and joined him at a press conference to support his pledge to increase funding to the arts.

The Labour Party leader paid tribute to the band before the show, saying, “UB40 has been an authentic socialist voice representing the many not the few for 40 years. They offered hope to millions in the 1980s when they sang with justified rage about the Thatcher government’s devastating effects on communities and eight years into 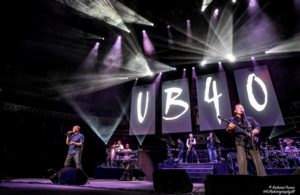 another period of Tory government, they continue to offer that voice. Long may they last.”

To further highlight UB40’s backing for Jeremy Corbyn, their new album and 2019 UK tour will be called For The Many, referencing his campaign slogan.

UB40’s lead singer Duncan Campbell – who replaced his brother Ali after he quit the band in 2008 – said, “After ten years of fronting UB40, for us to do an album of our own original material feels like this is the final hurdle for me. The album and its title reflect how UB40 are all in support of Jeremy Corbyn. Both of the songs I have written on the album also reflect this support of the Labour Party. We all feel this album is an album going back to what UB40 was all about. We are all excited for everybody to hear the album and looking forward to touring it.”

Co-vocalist and guitarist Robin Campbell added, “The 2019 UK tour is a continuation of our 40th year celebrations. Playing forty dates around the UK, instead of a few arenas, means that our fans from all over the UK can get to see us much more locally and up close – truly a tour for the many.”

UB40 drummer Jimmy Brown commented, “For The Many is a true reflection of where the band are at right now. It gave us an opportunity to go back to our roots and draw on the 1970’s-style reggae that inspired us to be in a band in the first place. There’s lots of dub, various guest toasters and a blend of love songs and political songs. We intended to make an uncompromising reggae album and I think we have achieved that.”

The group will also be releasing two companion versions of For The Many, as Brian Travers explains, “We have really enjoyed making this album, a huge amount of work went into it. It became a massive piece of work so, in addition to the regular version of the album, there will be a dub version and a collaboration version, featuring guest artists from all around the world.”

UB40 will play Arena Birmingham on December 21st, before their For The Many UK Tour in 2019 begins at Portsmouth’s Guildhall on 29th March 2019, with the final night of the tour taking place at Waterside in Aylesbury on 21st May 2019. Tickets are available from www.eventbright.co.uk