Another night of quality music awaits.

Birmingham Jazz will be hosting a date on first tour of the UK of Charged Particles with Paul McCandless at their usual venue of 1,000 Trades in the Jewellery Quarter on Friday 8th June.

The most exciting and creative music being made today crosses stylistic boundaries and blends diverse traditions to create engaging new sounds. Paul McCandless & Charged Particles features four US virtuosos doing just that in the acoustic and electric jazz arena. Their repertoire blends jazz with elements of Latin music, funk, classical music, and other genres. The group’s original compositions are mixtures of complex orchestration and elaborate improvised solos. 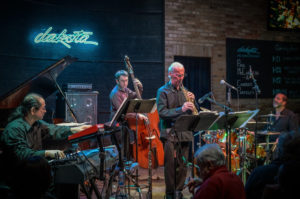 Paul McCandless is the reed player in the world-famous US quartet Oregon and has been for the past four decades. A Grammy Award winner, band leader in his own right and now making another appearance as guest with Charged Particles, Paul has a life inside the American classical world as well.

The band’s music has a distinctly acoustic sensibility, despite the members playing both acoustic and electric acoustic instruments. Their small size allows for sensitivity and spontaneity among the players, making each performance an enchanting improvisational exploration. The band’s energy level is always high, even when they are cooking at a volume no louder than a whisper, or floating through the melody of a romantic ballad. Each piece they play brims with the fun the players have together and with the admiration they have for each other.