The region’s various faiths have united in support of an action plan by West Midlands Mayor Andy Street to tackle key issues like youth unemployment and homelessness.

A message of collaboration and unity has been issued in response to the Faith Action Plan which follows months of engagement between the Mayor and different communities. The plan sets out how the Mayor aims to work with the many faiths in the West Midlands to make local communities, stronger, safer and more successful. 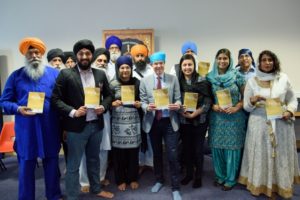 One proposal under the plan is to work with the West Midlands Police and Crime Commissioner David Jamieson to explore proposals for an anti-hate crime campaign similar to the successful ‘Kick it Out’ initiative used in the 1990s to tackle racism in football.

The Faith Action Plan is a direct result of the Mayor and Faith Conference, staged at the University of Birmingham in November, which saw more than 400 individuals from different faiths come together to discuss issues like reducing hate crime, increasing job opportunities and tackling homelessness.

The Mayor said: “Our faith communities and faith-based charities form one of the greatest – and often under-appreciated – sources of strength, vitality and resilience in our area. These communities are part of the West Midlands we call home, but are also one of the ways our region is connected to the world.

“So many different groups and faiths have worked with me on this plan and I would like to express my thanks for their input, in particular the members of the steering group for the Mayor and Faith Conference.”

• Offering faith communities the opportunity to bid for social programmes tendered by the West Midlands Combined Authority, such as skills contracts

• Working with faith organisations to prevent and deal with homelessness, providing ideas and practical advice for those who want to help but are not sure how

The Mayor added: “I hope that during my time as Mayor, these communities feel they can work with me to contribute to improving the lives of people in the West Midlands. For my part, I pledge to make sure these groups are represented in the work of the WMCA and feel they have a stake in what we are achieving.”

In launching the Action Plan the Mayor visited the Husseinia Mosque in Small Heath, Birmingham, sharing Ramadan’s first Iftar with the community there, the Guru Nanak Gurdwara in Smethwick High Street, the Wolverhampton Churches Together Pentecost celebration in Graiseley and the Walsall Ram Mandir in Ford Street, which celebrates its 27th anniversary this week.

Dr Beverly Lindsay, Vice Lord Lieutenant of the West Midlands, commented: “It was a pleasure and privilege to join colleagues on the Mayor’s Faith Action Steering group. Maintaining community cohesion, advancing diversity and inclusion is so deeply an important matter for us all in the West Midlands.

“People of faith have always played an integral role in shaping society and it is encouraging that under the Mayor, the role of faith based groups is being recognised and supported. I look forward to seeing the sustainability of the initiatives identified within the Faith Action Plan and the continued interfaith relationships.”

Francis Davis, Professor of Communities and Public Policy and director of public policy at the Edward Cadbury Centre at the University of Birmingham, added: “Through this document, and through his real enthusiasm for concrete action not just talk, Mayor Andy Street and the West Midlands Combined Authority become nationally significant in the conversation about how best city leaders can refresh social inclusion and enhance community collaboration.

“As co-chair it’s been an honour to support the process locally from the University of Birmingham and to have helped bring so many diverse groups together to contribute to shaping what is now a pioneering plan.”