Brendon – who played for the Black Country club from 1978 to 1982 – cycled 75km across the West Midlands to help raise vital funds for Birmingham St Mary’s. The event, known as Ride the Reservoir, saw the footballing legend and other cycling enthusiasts ride through the scenic villages of Romsley, Belbroughton, Chaddesley Corbett and Barnt Green, before heading back to Bartley Green reservoir. 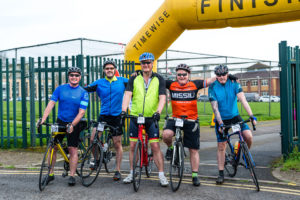 The ride was originally planned to take place on Sunday 18th March but was postponed to late April due to snowy weather. Whilst Brendon couldn’t make the new date, he decided to complete the cycle independently, to show his continued support for the hospice.

In 2009, Brendon’s wife, Cecily, was cared for by the hospice after being diagnosed with an incurable brain tumour. He said: “The care Cecily and my family received was just incredible. It was a massive comfort that she was cared for at home and I’ll never forget the kindness and dignity the nurses and doctors showed us.

“That’s why I wanted to take on Ride the Reservoir – as it’s my way of giving back to the charity that gave so much to my family. Whilst I was gutted that I couldn’t make the postponed date and ride with everyone else, I still really enjoyed getting on my bike and doing something great for the hospice.”

This year was Ride the Reservoir’s most successful event yet, as it raised a record-breaking amount of funds for the hospice and had its highest number of riders. All the money raised will go towards Birmingham St Mary’s, which provides vital care and support to local people living with life-limiting illness.

Lucy Watkins, head of fundraising at Birmingham St Mary’s, commented: “This year’s Ride the Reservoir was our best yet. There was a fantastic energy before the ride and it was brilliant to see so many people get pedalling for our hospice.

“It was a tough decision to postpone the event but it’s wonderful to see people who couldn’t make the new date – like Brendon – still get on their bike and complete the ride on their own. Thank you to everyone who took part – your generous fundraising will ensure that we can continue to provide our crucial care across Birmingham and Sandwell.”

To find out more about the hospice, visit: www.birminghamhospice.org.uk