Wholesale Markets to be immortalised in exhibition.

A major live performance and exhibition will take place inside Birmingham’s famous Wholesale Markets, Pershore Street, from Wednesday 30th May until Sunday 3rd June 2018 celebrating the end of nearly 900 years of unbroken market history on the site.

EVERYTHING MUST GO offers a rare opportunity for audiences to gain access to the largest Wholesale Markets in Europe, before the building is demolished for future regeneration of the area. 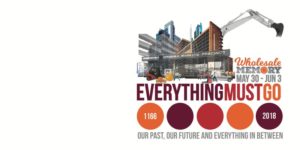 The celebratory live performance piece, produced by Birmingham-based Friction Arts, has been two years in the making and will feature a specially commissioned electronic soundtrack based on the sounds of the market, a 16-screen video showing footage, past and present, of the site; live musicians, sculptures, a photographic exhibition by Birmingham-based photographer Dan Burnwood, as well as performances and surprises from professional actors that reflect market life and memorable characters.

Audiences will enter the huge space and make their way around the building as the story of the Wholesale Markets unfolds and they themselves become part of this unique performance celebrating the history of this historical site.

Friction Arts have been making artworks and projects at the market since 2001, and since 2015 have been intensively recording, photographing and filming this special place.

Sandra Hall, Co-Director of Friction Arts said “We have been working on this project for several years spending thousands of hours meeting and recording market traders and customers. It’s been a fascinating and incredibly emotional journey listening to their stories.

Friction Arts work with communities locally as well as internationally and we’re delighted to have been given the chance to use the Wholesale Market space for this one-off Heritage performance piece right here in our home city. What is really exciting is that the information we have gathered will help form the basis of an archive to be housed at Birmingham Museum and Art Gallery and the Library of Birmingham.”

Birmingham’s Wholesale Markets, built on the site of the old manor House, opened in 1883 and have always reflected the diversity of the city and tastes and cultures of the communities that have settled here over its nearly 900-year history. Since the recent closure of the current market, built in 1974, traders are based at a new site in Witton.

Lee Griffiths, Co-Director Friction Arts added “Friction Arts has been established in Birmingham for 25 years and over this time we have seen a lot of regeneration in the city which reflects Birmingham’s famous motto ‘Forwards’. The Wholesale Market is a hidden space that has fed the people of Birmingham for generations. We would encourage as many people as possible over the performance week to share memories, take pride in their own history and enjoy hearing the stories and sounds before the doors are finally closed.”

EVERYTHING MUST GO is part of the Wholesale Memory project, kindly supported by the Heritage Lottery Fund and Arts Council England and will provide free tickets to local community groups and traders who will be given the chance to enter the site for one last time. Tickets cost of £10/£5 concessions and are available here – free to traders and their families.