Talking to opera singer Jennifer Holloway, ahead of her performance at Warwick Arts Centre.

American-born mezzo-soprano Jennifer Holloway came to international prominence in 2006, and has since performed major roles across the world, and for many of the leading opera companies, including ENO.

Her next role is the lead in Opera North’s in concert production of Richard Strauss’ dramatic Salome (Thursday 3rd May 2018, Warwick Arts Centre), conducted by Sir Richard Armstrong, in which she sings Salome.

Do you come from a musical family?

“My family loves music. But no, my parents were not musicians, which makes them all the more extraordinary. When I was five years old, my parents’ best friends inherited an old upright piano in terrible disrepair. Every time we would visit, I would disappear into the basement for hours to play on the piano. I begged my parents for piano lessons, and despite the fact that we were not very well off, my parents made it a priority to find a way to buy a piano and give all three of their girls lessons. They watched all of us grow to love playing music, and they cheered each of us on as we added other instruments to our repertoire.”

When did you first discover you could really sing?

“As I grew up, I never missed an opportunity to sing in a choir. I even took extra summer classes so that I could complete my required classes early and open up my schedule during the school year so I’d have the space to take choir. It wasn’t until my final year of university that I was asked to sing in an opera.”

And from there you eventually headed to the Manhattan School of Music up in New York City where you worked with Marlena Malas, widely regarded as one of America’s finest vocal teachers.

“By the absolute grace of God, I was somehow placed in Marlena Malas’ studio, and proceeded to learn very quickly. Those years were a whirlwind and the most wonderful gift. I keep in touch with many of those instructors today.

“As for discovering I could really sing, I suppose I am still a bit incredulous that I actually can. I still see Marlena regularly and work on my voice. I love this job, but for every moment that I think I might actually know what I am doing, there are at least three more that remind me I still have so much more to learn.”

You first performed the role of Salome in 2016 at The Semperoper in Dresden, the city where the opera premiered in 1905. How was that experience? 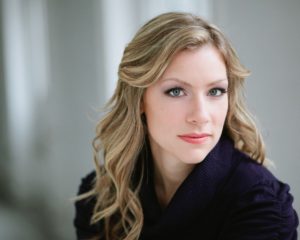 “It was tremendous! We rehearsed for a very long time; a total luxury. The director, Michael Schulz, was interested in finding the relatability and truthfulness of each of the characters and of the story line. The conductor, Omer Meier Wellber, fought against the boring common practice Salome, keeping the score fresh, bright, and exciting: perhaps more like the fairy music that Strauss envisioned. I got to sing my first big German soprano role, in Germany, in German, in front of Germans, on the stage of one of the most respected German houses. I believe I might have found what I am pretty good at.

“It was really hard work, and I called my best friend almost daily to break down and worry that I wasn’t up to the task. Every time, she would listen patiently, and then pick me up, dust me off, and send me back to rehearsal with a long-distance sweet kiss on my forehead. There are so many moments of self-doubt in this profession, but I am so lucky to have such support from my wonderful friends, family, and advisers.”

And now you’re revisiting the role for Opera North – does that present any new challenges ?

The performance is described as a concert, but how have Opera North approached it?

“I’ll admit: I was originally concerned about singing this piece, one that continues to live and to thrive based on its musical drama rather than on pretty tunes and lovely vocalism, in a straight concert. I was delighted to find out that Opera North is having none of this standing and singing Strauss at their audience. We are acting and reacting as we would in a fully-staged production. Rest assured that we will be telling the story, albeit in pretty dresses, imagined sets, and a more intimate contact with the audience.”

Over a century on, does the material still have the power to shock and surprise audiences?

“I will give you the same answer I gave in another publication – I think any opera and piece of art has the ability to shock or to cause controversy – isn’t that why we love and need art? It has the ability to open us up to a new, and often uncomfortable, way of thinking, sometimes about something we thought was not up for debate!

“In Strauss’ Salome, we have characters who we would normally judge as ‘good’ or ‘bad’ pretty quickly and easily: the mother who turns her head while hre daughter suffers abuse, the paedophile step father, the unfairly imprisoned religious pacifist, or the murderess who kills an innocent man. But Strauss doesn’t allow it to be so clear cut. The team usually knows the audience well and knows just how to make them question a bit, but also to delight them.

“But I also respect any production that pushes the audience to question every expectation, or to turn the story on its ear, to challenge the audience to see everything in a way that feels wrong or counterintuitive. It is an extraordinary and courageous thing when a composer, performer, or director takes the chance to push too far and makes people angry because they have said too much or ruined the preconceived notions the audience had about the story.”

Have you worked with any of the other singers in the production before?

“The only singer I have ever met or worked with is our First Jew, Adrian Dwyer. I sang Adalgisa, and he a wonderful and luxurious Flavio, in ENO’s Norma a couple of years back. Other than that, this is the first time I have met everyone. I am certainly impressed and delighted with this entire cast!”

What are your plans for after the Opera North performances?

“This season has been a bit of a whirlwind. I have slept in my own bed for a total of 30 days since the beginning of last June. I am looking forward to going home and spending time with my family. Of course, I will have to spend time learning all the music for the upcoming busy season; but mostly, I aim to rest and to be a wife, a mother, a daughter … and a lazy couch potato.”