Simon Hale is impressed by a new Alexandra Theatre’s adaptation of the musical by Sting.

Sting’s musical The Last Ship has been on a long journey since its first staged reading in his native Newcastle in 2013. It was premiered in Chicago the following year and then transferred to Broadway.

But despite the Grammy Award winner taking over the lead role from Jimmy Nail, it wasn’t enough to prevent its run from coming to an early end. Unable to relate to a community meltdown in Wallsend, New Yorkers stayed away. Having been lucky enough to have been part of its audience at the Neil Simon Theater, I found that a shame because the show was full of excitement.

Two years on, The Last Ship has docked in Birmingham simplified and refocused by its new director and book writer Lorne Campbell and the result is even better.
The production powerfully and movingly captures the despair of shipyard workers broken by international competition and 1980s Thatcherism. Baroness Tynedale is one of the new characters as a thinly disguised Thatcher. 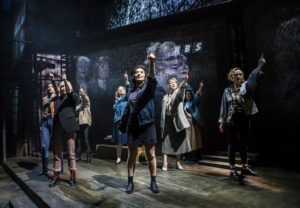 The shipyard is the only industry in the town: “What have we have got? We’ve got nowt else”, the workers chant repeatedly in one of the early anthems. But as the yard is about to close, they resolve to complete their final commission.

The theme of defiance is gritty and intoxicating although the show does seem to try to outdo Billy Elliot by bringing in a wider message about collective action for causes such as gun control and protecting the NHS.

A homage to Sting’s hometown, the highly autobiographical show also has a romantic love interest entwined within it which is enhanced by poignant ballads. While Sting turned his back on his community as a young man to pursue a musical career, Gideon Fletcher returns to Wallsend 17 years after running away to sea to find his teenage sweetheart Meg Dawson rejects him and their daughter has not even been told about him.

Richard Fleeshman, singing astonishingly like Sting, and Frances McNamee are the stand-out stars of the show with their strong voices and convincing characters. Katie Moore, in another parallel, is a lively and inspiring 16-year-old Ellen Dawson who yearns to go to London to fulfil her own musical dreams.

Joe McGann and Charlie Hardwick are impressive as the matter-of-fact foreman Jackie White and his wife Peggy, who lead the workers, but the smaller parts are sketchy and acted with poor diction. This made it difficult to hear all the dialogue from our seats at the back row of the stalls on opening night. Kevin Wathen as the drunken Davey Harrison was almost incomprehensible.

It also took a bit of head-dipping to see the full height of a stage restricted by the dress circle and fully appreciate the set by 59 Productions that superbly blends an industrial superstructure with a host of evocative projections.

The cast are supported by an excellent five-strong band on an evening that even saw Sting take to the stage again but purely for the curtain call.

The Last Ship is in performance at the New Alexandra Theatre, Birmingham until Saturday, April 21 (Box office 0844 871 3011 or ATGTICKETS.COM/Birmingham