Beatles insider and former MD of Apple Records Tony Bramwell talks with Steve Beauchampé ahead of his show in King’s Heath on March 22nd.

Tell us about the show. What can we expect?

“It’s a pretty laid back evening really. I just talk about what it was like to be there, from the dark days of those small Liverpool gigs to travelling on the rollercoaster ride that followed. My childhood memories of growing up with George and Paul, working for Brian Epstein at NEMS, making the promotional films and later running Apple and Polydor.”

Did you go on tour with the Beatles?

“Oh yeah, but it was often very spur of the moment. At NEMS you could be working with any of the acts, so I went on tour with Cilla, visited New Zealand with Billy J. Kramer, flew to the USA for a few days to help out with part of a Beatles tour.”

Were you at any of the Beatles Birmingham shows?

“Well, I understand that this show I’m doing at Fletcher’s is opposite the old King’s Heath Plaza that the Regan family operated, because I remember trying to get there with the Beatles in January 1963, only to be turned back by a heavy snow storm which caused the show to be cancelled. But I came to the West Midlands during the group’s early UK tours which were also during the winter of 1963; first on the Helen Shapiro tour and a month to two later when they were with Chris Montez and Tommy Roe.” 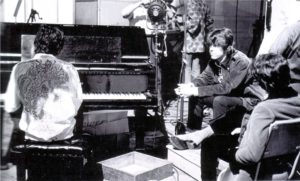 After the Beatles fame became global and fan hysteria made it very hard for them to live TV appearances you began making promotional films for them to send around instead, almost inventing the whole music video genre in the process. I believe you’ll be showing some of these on March 22nd?

“Yes, along with some bits of audio. Nothing that hardcore Beatles fans won’t have seen but perhaps in better quality than is usually the case. And I also shot the footage of Cilla rehearsing and recording the song Alfie with composer Burt Bacharach and producer George Martin.”

You booked acts for Brian at the Saville Theatre in Piccadilly, which he owned – including Jimi Hendrix’s first UK performance – before the Beatles asked you to run their Apple label. And you were on the roof with them at Apple in January 1969 when they performed live together for the final time, so it really was full on.

“But perhaps the craziest thing is that half a century later people still want me to talk about it. I do about 20-30 of these shows each year; fan conventions, Beatles Week on Merseyside in August, and there can be thousands of people there, drawn from all generations. But I’m not one for putting the Beatles on a pedestal, they were not saints… John Lennon was definitely NOT a saint!”

Do you still see Paul and Ringo?

“Yeah, we’re still in contact, I go to see Paul play live sometimes and Ringo’s shows are just brilliant. I’m also still very good friends with Denny Laine, whose from Birmingham of course and whom I’ve known since the mid-sixties when the Moody Blues toured with the Beatles and had Brian as their manager.”

Tony’s book – Magical Mystery Tours, My Life With The Beatles – is available from both Waterstones and Amazon UK.