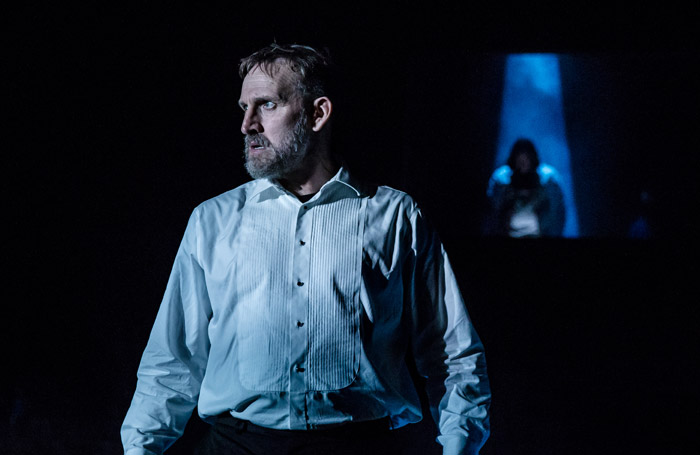 credit: The other Richard

Richard Lutz watches an up to the minute production at the Royal Shakespeare Theatre. But does it work? he asks.

Off for a blizzard of classroom quotes with Macbeth. The Shakespeare tragedy is crammed with them and I could  almost hear a sell-out RSC main theatre sigh with recognition as we watch Lady Macbeth rub her anxious hands and say “Out spot”; her manic hubby go on about “the sound and fury signifying nothing” and my personal favourite describing “the multitudinous seas incarnadine, making the green one red”. Yep, love that one.

But either my ears were plugged up something fierce or macho actor Christopher Eccleston (above) just couldn’t give nuance to this big time script. It was as if he was getting through the play rather than giving it a cry from the bloody guts.

His performance, to be fair,  was encased in a tricksy techy production by director Polly Findlay. The witches were three little girls in red onesies reminiscent of The Shining or Don’t Look Now. They not only gave out their dire prophesies to Macbeth, but helped move stage furniture and offer a helping hand, highlighting that the supernatural is omniscient- a major point for the author who knew which side his muffin was buttered on with his new boss, James the First, who wrote a book on demonology.

Other tricks: A digital clock hung overhead counting down from two hours. I had no idea why. It all made sense at near zero when…well, I’ll let you see for yourself. And highlighted quotes were sur-titled above the action to remind us about the ticking of time. Were these added gestures really needed?

Lady Macbeth, laden with murder and guilt, was elegantly created by Niamh Cusack. She was temptress, conspirator, mad. Michael Hodgson got it dead right as the creepy porter. He is on stage the whole time. One minute he is explaining the plot, the next hoovering up around the conspirators, the next literally chalking up the dead on a brick wall. And from time to time grimly helping murderers find their way to their victims. He is part ghoul, part officious janitor, part comedian, part overseer of Macbeth’s demise. It’s a nice touch and a spooky one.

In all, a play with lots of questions. Macbeth is a heavily loaded play about the otherworld, the royal succession and the tyrant called time. Shakespeare’s vivid and iron-hard words were many times lost. And that’s  a pity in this intriguing tech-laden production.