Birmingham woman in line for national recognition at diversity awards.

Shani Dhanda, a local role model from Birmingham, has been nominated for the Entrepreneur of Excellence at the National Diversity Awards 2018. 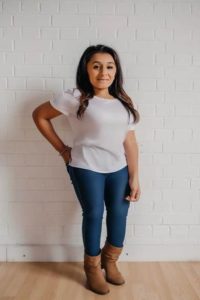 The breathtaking Liverpool Anglican Cathedral will play host to this year’s awards, to be held on 14th September. Britain’s most inspirational and selfless people will come together to honour the rich tapestry of our nation, recognising individuals and groups from grass-roots communities. The prestigious black tie event recognises nominees in their respective fields of diversity including age, disability, gender, race, faith, religion and sexual orientation.

Shani is an award-winning international event manager, global voyager, disability rights advocate and speaker. She was born with a rare genetic condition called Osteogenesis Imperfecta, more commonly known as Brittle Bones, affecting one in every 15,000 people in the UK. This condition is characterised by bones that break easily, often from little or no apparent cause. Though fragile bones are the hallmark of OI, other medical problems also stem from this condition, the most obvious being a short stature and Shani is 3’10’.

Raising awareness about disability and diversity is Shani’s passion – by challenging perceptions and changing attitudes in society through sharing her journey to inspire and motivate others. Shani has been nominated as one of Britain’s most influential disabled people by the Shaw Trust this year.

In August 2017, Shani founded the Diversability Card, the UK’s official discount card for people with disabilities. The scheme is the first of its kind for people with disabilities and Richard Branson has even tweeted her about it! Shani is also the founder of the newly-created Asian Woman Festival, launching in Birmingham on 10th November. It’s the UK’s first of its kind event celebrating the female Asian identity and creating an open dialogue to discuss issues relating to our community. In addition to her own ventures, Shani is currently working with Virgin Media as a disability programme manager, enabling change within diversity and inclusion strategies across the business.

Shani gives her time to a number of charities and advisory board roles, and is always happy to share knowledge. She serves as a role model for the UK’s leading disability charity, Scope, helping to create inclusive learning environments and start conversations about disability. Shani is also an ambassador for Include Me Too, supporting disabled children, young people and their families from a diverse range of backgrounds. She also serves as a trustee for Cysters and Styleability. Shani is a regular contributor on radio and news including Channel 4, BBC News and the Huffington Post, and blogs for the Brittle Bone Society.

Microsoft and Direct Line were 2017 Headline sponsors of the UK’s largest diversity awards, attracting a growing list of supporters including Sir Lenny Henry, Graham Norton and Katie Piper. Olympic diver Tom Daley said, “The National Diversity Awards is a true celebration. A celebration of role models and community organisations who are having a huge impact on people lives. Everybody who has been nominated and shortlisted is striving towards making society better for everyone, regardless of age, gender, race, faith, religion, sexual orientation or disability. I would like to wish all nominees the very best of luck at this year’s National Diversity Awards.”

Bodybuilder James Sutliff received a gong for using his impressive social media following to highlight the neurological dysfunction disorder Dystonia, and ELOP were praised for supporting thousands of LGBT people across East London.

Childhood Tumour Trust, MenTell Health and Caribbean Social Forum were also recognised amongst some of the UK’s most inspiring role models and community organisations.

The National Diversity Awards receives over 20,000 nominations and votes annually. Founder & CEO Paul Sesay said, “After an eye opening year we look to those who represent progress, spirit and resilience. As we enter our seventh awards season, the game changers and peacemakers who remain unheard will shine under the spotlight, and reach every section of society with their passion and positivity. I look forward to learning about this year’s nominees and witnessing their spectacular journeys.”

Shani commented, “I’m truly honoured to be nominated for a National Diversity award which honours positive role models within the equality and diversity sector. Due to the lack underrepresentation of both disabled and South Asian communities in society today, it motivates me to work harder for recognition and inclusion so we don’t have to continually fight to get a seat at the table.

“I grew up without any role models in mainstream media and in 30 years, nothing much has really changed. Without representation of all genders, races, sexes, sexualities and body types there are stories that are missing, so I chose to become the change I wanted to see.”