The public is being asked for its views on four proposed road schemes in Birmingham city centre aimed at reducing the impact of building work to extend the Midland Metro. 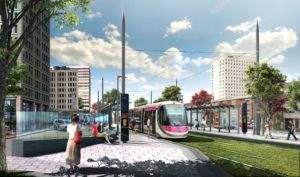 A new route is being built from New Street Station to Edgbaston, mostly along Broad Street. This will mean changes for some traffic, including buses, particularly at Paradise Queensway and Five Ways.

Transport for West Midlands, part of the West Midlands Combined Authority, has worked with Birmingham City Council to develop proposals to minimise the impact on bus users.

The changes are scheduled to start from this summer and will see new bus priority measures, including at Bath Row where some bus services will divert, and at Great Charles Street Queensway.

Laura Shoaf, managing director of TfWM said: “The Midland Metro extension along Broad Street is going to transform public transport in this part of Birmingham, but while construction takes place we need to make sure buses can continue to operate.

“The work is going to mean possible disruption for buses, particularly at Paradise Circus Queensway and Five Ways. We want to know what people think of the measures we plan to bring in to help ensure we can come up with the best solution for buses and bus users.”

There are four proposed schemes, which would be introduced at different times during the works:

Proposal 1 – Sheepcote Street
· Southbound bus lane on Sheepcote Street from the entrance of the Arena Birmingham (NIA) car park to King Edward’s Drive (in the direction of Broad Street).
· Removal of existing bus lane at the junction of St. Vincent Street and Sheepcote Street.

People can give their views here

There will also be drop-in sessions on:

The consultation closes on Wednesday 21nd March 2018. Responses will then be considered and appropriate changes made to the proposals.