During January and early February Theatre Absolute invited Midlands-based writers to take over the Shop Front Theatre pillars with poetry in response to the current Are We Where We Are programme of new work. On Saturday 10th February the winner was chosen by Theatre Absolute, Silhouette Press and Writing West Midlands.

Coventry-based Emma Kemp (pictured) won the inaugural award of £200 for her work Phoenix which explores how preconceptions form new understandings, not as a destination but as a step 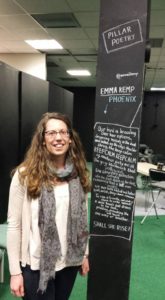 on the journey. Her poem, along with the work of the two runners up – Aysar Ghassan’s Bit Rot and Craig Muir’s Exiled who each received £100 for their work – will appear in situ in the Shop Front Theatre on the pillars for the remainder of the current Are We Where We Are play Choke by Chris O’Connell.

31 poets from across the Midlands submitted their work to Theatre Absolute Associate Producer Paul O’Donnell, responding to the ideas at the heart of Are We Where We Are, which have seen playwrights over the last telve months respond to Henry David Thoreau’s proposition grappling with the notion that, here in the 21st Century, we are not where we are, but in fact somewhere else.

Julia Negus, Producer Theatre Absolute said: “We, as a company have a passion for developing the work of other writers and artists, demonstrated through the creation of both our Writing Gym and @38 development programmes. Through Pillar Poetry as part of our Are We Where We Are programme we have been able to create another opportunity for writers to create new work which we can share with our audiences at the Shop Front.”

Emma Kemp, poet and Pillar Poetry winner said: “Are we where we are? seems like a strange question, but as it turns out, it is a question capable of generating a lot of creativity. Theatre Absolute have been able to take that question and explore it from multiple angles, creating some inspiring work. It’s great that they are interested in encouraging other art forms, and I enjoyed the opportunity to be able to respond to the theme through the lens of poetry.”

To-date Are We Where We Are? has seen four short form pieces written and performed by Jules Orcullo, Laila Alj, Sarah Woods and Chris Thorpe and a monologue written by Rabiah Hussain play to sell out performances at the Shop Front Theatre. Choke by Chris O’Connell is currently on at the Shop Front Theatre and audiences can expect a devised ensemble production later in the year.

Choke tells the story of lifelong friends Rob and Stu, each staring into the gap between who they thought they were, and who they are now. Choke is written and directed by Chris O’Connell, co-founder, writer and artistic director of Theatre Absolute. The play runs for the remainder of this week including: Wednesday 14th, Thursday 15th and Saturday 17th February – Evenings 7.30pm plus additional matinee performance Thursday 15th February. Tickets £8.00 & £6.00 here