Sir Peter Wright created his version of The Sleeping Beauty for Birmingham Royal Ballet’s precursor Sadler’s Wells Royal Ballet, as long ago as 1984.

Based on the original choreography of the 19th century master of classical ballet Marius Petipa and danced in lavish dress in the gilded opulence of a Russian Imperial court, and in tutus and tights in a fairy tale forest, this production remains the one against which all ballets should be judged. 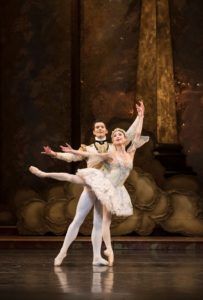 A traditional battle between good and evil is played out in the simple and well-known tale of a princess who pricks her finger on a poisoned spindle, given to her by a malevolent fairy, with only the love of a handsome prince able to revive her from a sleep of a hundred years.

Momoko Hirata danced a brilliant Princess Aurora on the opening night of Birmingham Royal Ballet’s latest run of the show at Birmingham Hippodrome. Capturing teenage exuberance and innocence on her 16th birthday as she receives her suitors, she went on to dance a faultless Rose Adagio – one of the most technically demanding routines in ballet with its spinning on pointe – before demonstrating her maturity in committing herself to the only man who can save her.

Mathias Dingman’s strengths were more in his dancing ability that his characterisation (he fell short of delivering a convincing emotional bond) as Prince Florimund, but he and Hirata pulled off a wonderful grand pas de deux that had the audience applauding well before it had been completed.

In the fairy tale divertissements, the high-kicking Lachlan Monaghan and the dazzling Yaoqian Shang also gave a stand out pas de deux as the Bluebird and the Enchanted Princess, while Kit Holder and Yvette Knight made for an amusing Puss-in-Boots and the White Cat.

The production also provided a journey back in time to the art of mime, with Nao Sakuma looking gorgeously spiteful in her black costume as the Fairy Carabosse and Jenna Roberts in an otherwise slightly dowdy dress explaining the narrative with ease through their gestures.

Tchaikovsky’s sumptuous symphonic-style score, performed superbly by the Royal Ballet Sinfonia under Koen Kessels, did the rest of the trick. Its respective themes presaging evil and celebrating good helped deliver some of the most memorable and moving passages in the ballet.

The Sleeping Beauty is in production at Birmingham Hippodrome until Saturday, February 24th.