Beatles aide to give talk in Kings Heath. 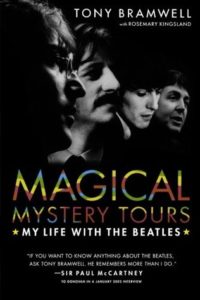 Tony Bramwell is probably as close as you can now get now to the Beatles’ inner circle. He grew up with the group in Liverpool – George and Paul were his school friends – they all hung out together on their bikes and their mums knew each other in the small Liverpool community near Strawberry Fields and Penny Lane were where they cycled. He was there from the very beginning, giving up his job at car maker Ford’s to become the group’s tour manager alongside Neil Aspinall and one of Brian Epstein’s right-hand men at NEMS Enterprises.

He was often in the studio with the Beatles and he made their promo films, establishing a template for music videos years before anyone used such terminology. He worked on the Magical Mystery Tour film and booked the acts for Epstein’s Saville Theatre in Piccadilly. In short, Tony Bramwell was in the heart of the Beatles’ world.

When the Beatles set up Apple in 1968 they gave Tony the job of running their record company and made him Managing Director. Tony was there on the roof with them in January 1969 when they performed together in public for the final time. He promoted Jimi Hendrix’s first ever UK show and later worked with Bruce Springsteen and James Taylor, amongst many other stellar names.

Tony Bramwell’s book – Magical Mystery Tours, My Life With The Beatles – is now a collectable and he is in demand the world over at Beatles fan gatherings. As Paul McCartney said in 2004: “Tony knows more about us than we do”.

On Thursday, March 22nd Tony Bramwell is coming to Birmingham to speak at the Kitchen Garden Cafe for their The Eight O’Clock Rock Chats with images, film music and a Q&A. Tony Bramwell is truly one of the last people left who can say that they were there, from the start. It promises to be Fab!