“Speak Up about who is carrying a gun” to help make the city’s streets safer. 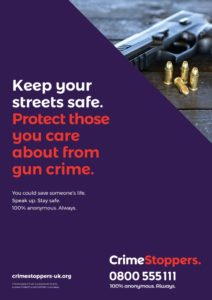 Independent charity Crimestoppers is urging anyone who has information about those carrying a gun to tell them anonymously what they know. The appeal is part of a four-week campaign to make Birmingham’s streets safer.

Throughout 2017, the charity’s UK Contact Centre received nearly 500 pieces of information about gun crime from the public in the West Midlands who trusted us to pass on information. They did so in the certainty that they would always remain anonymous.

Figures from the Office of National Statistics show that gun crimes are up in England and Wales by 27% in the year to June 2017. Last year a surge in gun crime across Birmingham included incidents such as a drive-by shooting.

Pauline Hadley, West Midlands Regional Manager at the Crimestoppers charity, said: “Like all major cities, Birmingham has its fair share of gun crime and last year saw a particularly worrying rise in gun-related incidents. Join those 500 people who are already helping to keep our streets safe from gun crime, by telling us what you know.

“We urge anyone who has information to come forward and speak to us 100% anonymously. We are a charity giving people the power to speak up to stop crime. We won’t ask your name and we won’t judge. We’ll just listen to what you know. Please speak up and stay safe.”

If you have any information, please contact Crimestoppers charity 100% anonymously on 0800 555 111 or through the non-traceable Anonymous Online Form at www.crimestoppers-uk.org.