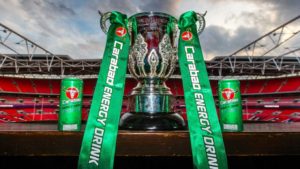 There was a time when the League Cup was Villa’s competition. From the first winners of the trophy via the greatest night in Villa Park’s history, rebounded penalties, goals from fifty yards, legends walking on water, second replays and shoot-outs through to showpiece final wins heralding the dawn of greater days that sadly never arrived, the trophy was a part of our modern history like no other.

Now, we regard the League Cup about as highly as any other club does, that is to say at best an irrelevance, at worst an unwelcome distraction. Just about the only attraction a night in Colchester held was the opportunity to visit a new ground, and a good turnout of Villa supporters headed east during a filthy day that turned into an even worse night.

So bad was the weather that it took three pitch inspection before the game was declared on, and as expected Steve Bruce took the opportunity to rest a few players and give a run-out to others. Nine changes from last Sunday including a start for Callum O’Hare and Birkir Bjarnason at left-back with Joshua Onomah making his first start, showed where Bruce’s priorities lie at this stage of the season.

Villa got off to a good start, going two up inside twenty minutes although the usual defensive uncertainties had also seen a penalty given away and other chances handed to a Colchester side who themselves seemed below full-strength. But five minutes before half-time Colchester’s attacking ideas seemed to have ended and the biggest worry was that driving rain might cause the game to be abandoned. Then a deflection crept past Jed Steer and it was back to the familiar default mode of panic.

The team seemed a bit brighter in the second half, although as usual they were holding on in the final stages with Steer taking the Man of the Match plaudits with a fine performance. Of the outfield players Onomah’s performance bodes well for the rest of the season, Chris Samba got into the game after a ropey start and Ritchie de Laet made a welcome return in the closing stages after a lengthy time out through injury.

I’m a firm believer in the adage that the only thing that matters about a cup tie is to be in the hat for the next round. The weather has to be taken into account although Villa should still have been a lot more comfortable against a poor League Two side. Then again, looking back at our League Cup record over the past couple of decades shows more defeats on nights like this than decent runs so perhaps we should just be grateful for the win and look forward to Saturday’s game at Cardiff, where three points will be more than welcome.

By then we’ll know who we’ll be facing in the next round. I hope we get glamorous Premier League opposition such as Bournemouth or Huddersfield; we could really do with another of those memorable League Cup nights at Villa Park.