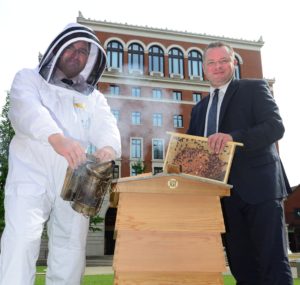 Everyone knows that bears love honey and with four bears at Brindleyplace as part of The Big Sleuth city-wide trail this summer, the addition of two beehives to the roof of 3 Brindleyplace is sure to be a sweet success.

Brindleyplace has introduced around 80,000 honey bees to the area in the new rooftop hives, helping to combat the decline in bee populations across the UK through an initiative led by its managing agent, GVA.

Nathan Sanghera, Marketing and Events Executive at Brindleyplace, said: “It’s great to see the Brindleyplace estate buzzing at any time but at the moment, with visitors enjoying the outdoor spaces and festivals, taking part in The Big Sleuth trail and finding their way to our four bears, and the hives now in place there’s even more for people to see and do. Our bees won’t be producing honey until next year at the earliest though, as they settle in to their new home, so it’s safe to say Bear’indleyplace, Bearlock and our other resident sculptures won’t be raiding the hives while they’re here!”

Home to more than 10,000 employees and 28 restaurants, bars and cafes, alongside the internationally-acclaimed Ikon galley, Crescent Theatre, National SEALIFE Centre Birmingham and now four giant Sun Bear sculptures, Brindleyplace is set to be busy with sleuth-spotting families until Sunday 17th September, after which the bears will be auctioned off in aid of Birmingham’s Children Hospital.

Nathan continued: “As one our charity partners this year, it’s been fantastic to support and their Big Sleuth campaign. They’re also working with us at the Chilli Festival this year, so we’re planning a Teddy Bears’ Picnic as part of that event on Saturday 16th September to wave the bears goodbye. Make sure you pick up a map and get sleuth-spotting this summer – while you’re at it, see what other wildlife you can spot at Brindleyplace and around the canals.”

To find out more about this year’s Chilli Festival visit www.brindleyplace.com