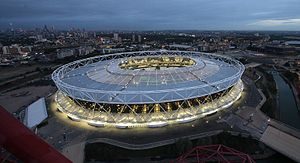 With a mixture of arrogance and condescension, outgoing UK Athletics Chairman Ed Warner told BBC Radio 5Live’s Sportsweek programme on Sunday that it would be a smart move by the two English Commonwealth Games 2022 candidate cities, Birmingham and Liverpool, to allow London to stage the athletic events instead of their hosting them.

A key element of Mr Warner’s thinking behind removing the blue riband Commonwealth Games sport from two cities, either of which are capable of staging a high quality Games, is that with lottery funding for athletics expected to be reduced after the 2020 Olympics, UK Athletics needs to find additional revenue streams to fund both the overall cost of running the sport and of operating the London Stadium in Stratford, which it does for two months each summer.

“We need a ten-year programme of big championships that can be brought here. World paras again…European championships in 2022. And Commonwealth Games in 2022 – I would say a Liverpool or Birmingham bid could really smarten themselves up by saying, ‘let’s do the athletics in London and we’ll do everything else…’ with Birmingham giving up on creating a new 40,000-seater stadium which won’t be filled again and saying ‘let’s partner up with London just for the athletics’.

“If I was leader of the Liverpool or Birmingham bid I would be ringing (London Mayor) Sadiq Khan and say, ‘You know what, can we have the athletics in London and we will do everything else’?’ The first one to make the call has the knockout bid.”

Warner argues that both the cost of installing and removing temporary facilities at Everton’s proposed new home at Bramley-Moore Dock, or expanding Birmingham’s Alexander Stadium to the aforementioned 40,000 seats (and later scaling it back to a maximum 25,000 following the Games) could be avoided, whilst the almost guaranteed daily 60,000 capacity crowds at the London Stadium would generate both increased revenue and a better atmosphere.

Given that both Birmingham and Liverpool must submit their final 2022 bid proposals by this Friday, with inspection visits by government and Commonwealth Games appointed assessors scheduled for later this month, Ed Warner’s proposal might mercifully be too late to be impactful. It would in any case bring justifiable indignation from those in both cities who have put considerable time, effort and resources into pulling together their bids at short notice following the Commonwealth Game’s Federation’s decision to seek a new host after Durban was dropped last March.

However, should Ed Warner’s views be shared by other senior officials at UK Athletics (even with their offices based at the Alexander Stadium!) and by his successor Richard Bowker then this might not be good news for Birmingham even if co-hosting with London in 2022 seems highly unlikely.

Central to Birmingham’s Games bid and it’s legacy is a plan to make the Alexander Stadium the home of British athletics, staging numerous (although unspecified) major track and field events. Birmingham already labels itself ‘the UK city of running’, but whilst following the Games the Alexander Stadium might expect to continue holding an annual Diamond League meeting as well as the national trials for the UK’s World and Olympic squads, it is hard to imagine what other events with sizeable crowd-drawing potential might be attracted here if the sport’s governing body is committed to the London Stadium, financially and perhaps emotionally.

Conversely, any long-term aim of UK Athletics to prioritise London for future major events would have little or no impact on Liverpool‘s Commonwealth Games bid, where there are no post-Games aspirations to host stadium-based athletics events of size.

With Birmingham still to publicly confirm the location for the core Games events of swimming and track cycling as well as the athlete’s village, so close to the bid submission deadline, anything that could undermine it’s long-term plans for the Alexander Stadium would be an unwelcome distraction. The city must hope that previous supportive comments about an Alexander Stadium re-build from UK Athletics Chief Executive Niels De Vos as well as the wider considerations of DCMS/CGE assessors outweigh the specific needs of UK Athletics as expressed by Ed Warner.