The countdown is on to Birmingham’s oldest music festival, and its new name. 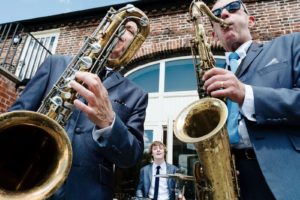 What began in 1985 as the Birmingham International Jazz Festival spread its wings last year to include one of the city’s neighbours, Solihull, and this year has added another, Sandwell. This has, of course, resulted in a boom number of events in what has always been a packed programme. The 2017 programme boasts 210 performances, 198 of them free admission, in 86 venues.

210 performances means that there is only space to pick out a few highlights. Lovers of the robust, but highly skilled brand of Chicago Dixieland practised at Nick’s Restaurant in New York by guitarist/bandleader/iconoclast Eddie Condon have cause to rejoice. The Lower Broad Street Philharmonic has been assembled to play seven free-admission gigs in the time-honoured ‘Nicksieland’ style. An all-star line-up, with a clutch of British Jazz Awards between them, consists of Bruce Adams (trumpet), Ian Bateman (trombone), Vasilis Xenopoulos (reeds), Dave Newton (piano), Dave Green (bass) and Steve Brown (drums).

Once again the Lithuanian Embassy has been most supportive of the festival – and this has resulted in the appearance of a legendary jazz bassist. Star singer Viktorija Gecyte will be renewing her partnership with Gene Perla who has in his time worked with singers such as Sarah Vaughan and Nina Simone. Born in New Jersey in 1940, originally a piano student at Berklee and Boston Conservatoire, Perla spent two years in the early 1970s with Elvin Jones and also worked with Woody Herman, the Thad Jones/Mel Lewis Big Band, Miles Davis and Sonny Rollins. Apart from many Elvin Jones albums, he appeared on Frank Foster’s Loud Minority.

In addition to many top British jazz and blues musicians, there is a strong international representation (Spain, Italy, France, Netherlands, USA), with the most spectacularly multi-national group the Israeli/Australian/American/British Duved Dunayevsky Quartet.

The Birmingham Festival is always renowned for its many audience-involving fringe activities and this year shows no let-up in ukulele or photography workshops, dance sessions or sketchers groups, with barber shop quartets and cigar box guitar demonstrations joining the mix. The most exciting innovation is probably the Festival Hub at Around the World on Broad Street, every afternoon devoted to a jazz gabfest and movie show, with musical guests putting films in context – for example, New Orleans-style pianists Justin Randall and Dom Pipkin pointing the way to the acclaimed film about James Booker, The Bayou Maharajah.

The Birmingham, Solihull and Sandwell Jazz Festival runs from July 14th to 23rd. Details can be found at www.birminghamjazzfestival.com