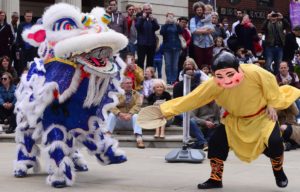 In just a few weeks, businesses from across Birmingham will be taking to the canals to take part in the biggest Brindleyplace Dragonboat race to date.

Sponsored by Deutsche Bank and now in its 18th year, the annual fundraising event will be aiming to raise more than £100,000 in aid of Cure Leukaemia’s £1million Centre

Appeal. To help raise awareness, all visitors are being encouraged to wear red on the day in a bid to show their support for the charity.
Kicking off at 11am on Saturday 24th June, the Dragonboat race is a family-fun event and, as well as the multiple boat races that take centre stage throughout the day, there will be various market stalls and free live entertainment for people to enjoy – not forgetting the hoards of fancy dress costumes that will certainly prove a talking point.

To help count down to the race, we’ve looked back at some of the highlights from the past 18 years and compiled 18 facts that you might not know about one of the city’s most long-standing fundraising events:

1. 3,564 people from the Birmingham business community have competed in the Brindleyplace Dragonboat race.
2. More than 250,000 spectators have watched the races over the past 18 years.
3. £515,975 has been raised for local charities, including The British Heart Foundation, Birmingham Children’s Hospital, Barnardo’s, Help Harry Help Others and Cure Leukaemia, thanks to the Brindleyplace Dragonboat Festival.
4. £135,340 of that total amount was raised in the past two years in aid of Cure Leukaemia.
5. GVA has competed every year since the Brindleyplace Dragonboat Race launched in 1999 and will join 15 other teams taking part this year (some of which have more than one boat).
6. Typically, the winning teams have done some form of training at Edgbaston Reservoir. The other teams tend to have jumped in a boat for the first time on the day.
7. Contestants are most likely to win the fancy dress competition if they are dressed as characters from films, including superheroes, villains and Harry Potter. Other costumes have included Crayola crayons, Vikings, cows, Oompa Lumpas, and Where’s Wally.
8. Teams race 250 metres along the Birmingham and Worcester Canal at Brindleyplace. The winning team and runners-up cover 750 metres of water on the day (that’s seven times the length of Aston Villa’s football pitch).
9. Over the years, just three teams have capsized into the canal. The first was in 2015.
10. The Paddle of Pity is given to the losing team and was introduced in 2015. It has been won by Matalan and Cure Leukaemia.
11. Celebrities Adrian Chiles, Geoff Thomas and Adam Ricketts have all taken part in the Brindleyplace Dragonboat race.
12. West Midlands Fire Service has won the most Dragonboat races, winning two years in a row in 2013 and 2014. They were also in the final of the first ever Dragonboat race at Brindleyplace.
13. 47 dragons have attended the Dragonboat Race (every year, two Chinese lion dancers entertain the crowds and, in 2014, a team from Deutsche Bank dressed up as dragons).
14. 180 oars, 18 drums and 20 boats are used in the races every year.
15. Dragonboat Racing is believed to have originated in China over 2,000 years ago. Traditionally, the races were held to encourage the rains needed for prosperity as the dragon of Asia was said to rule the rivers and seas and dominate the clouds and rains.
16. Deutsche Bank has sponsored the Dragonboat race six times in a row.
17. It’s advised that teams choose their smallest contestant as the drummer as this tends to help the boat go faster.
18. The theme tune for the final race of the Brindleyplace Dragonboat race is always Hawaii Five-0.
To find out more about this year’s Dragonboat Race visit www.brindleyplace.com