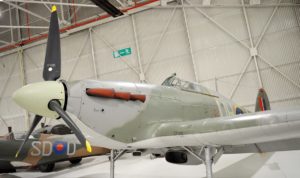 A collection of aircraft from the Royal Air Force Museum Cosford will be joining the line-up in a static display at the RAF Cosford Air Show, taking place on Sunday 11 June 2017. Aircraft confirmed to appear include the British Aerospace Experimental Aircraft Programme, the BAe Harrier GR9A and completing the museum’s display at this year’s show is the Hawker Hurricane IIc.

As part of the Air Show’s key theme this year International Co-operation, the British Aerospace Experimental Aircraft Programme and the BAe Harrier GR9A will be rolled out from the museum hangars and exhibited outside on the airfield, forming part of a unique display of aircraft which are manufactured in multinational environments. These aircraft show the evolution of aircraft design and construction from single manufacturer through joint company schemes to multinational component manufacture. Both aircraft are sure to be a popular attraction for aviation fans visiting the show, which attracts in excess of 50,000 visitors each year.

This year’s RAF Cosford Air Show will also be celebrating the sixtieth anniversary of the Battle of Britain Memorial Flight, originally formed as the Historic Aircraft Flight in 1957. This national treasure and jewel in the RAF’s crown will be marking the anniversary with a special flying display. On the ground, the RAF Museum’s Hawker Hurricane IIc will be on static display allowing aviation fans to get up close to one of Britain’s most iconic aircraft and the main aircraft of RAF Fighter Command squadrons during the Battle of Britain.

RAF Museum Cosford Curator, Al McLean said: “This is the perfect opportunity for aviation fans and photographers to get stand-alone photos of our aircraft outside of the hangar, particularly the EAP which is unique to Cosford and is rarely seen outside. We are delighted to be able to support the show again this year with static aircraft displays and we hope they will prove popular with visitors.”

In addition to the aircraft displays, the museum’s Access and Learning team will be running workshops in the Whittle Innovation Centre on the airfield throughout the day, where families can take part in rocket car activities, in free drop-in sessions. There will also be the opportunity to try on some of the jackets, hats and flying goggles from the Museum’s handling collection and view some of the objects used by RAF personnel through the years. To find out more about the museum and the wide range of learning opportunities available, head to the Whittle Innovation Centre and speak with the team.

RAF Museum Cosford Access and Learning Manager, Julie Brierley said: “Last year was our first time exhibiting at the Air Show and we were delighted that over 1,000 visitors took part in our STEM workshops. This year, we will again be showcasing some of the activities we run with school groups and we actively encourage families to get involved and have a go. There will be free rocket car workshops running throughout the day in the Whittle Innovation Centre building, situated on the airfield and we hope that families will join us for some hands-on fun.”

Tickets for the RAF Cosford Air Show are advanced sale only and cost £25 per person with free entry for accompanied under 16s. Tickets will not be available to purchase on the gate so to avoid disappointment, visit the show’s website www.cosfordairshow.co.uk Tickaters are are also available to purchase in advance from the nuseum.