Comedian Josh Howie reflects on Birmingham ahead of his Glee Club date next month. 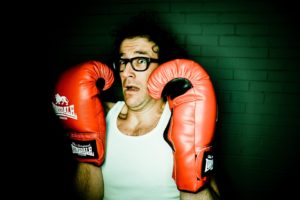 Being funny is easy. It only takes about ten years of hard graft and rejection. The trickiest part of being a comedian is instead, how to best fill up your time when you’re away from home and loved ones? Or in my case, just home. I’m still working on the loved ones bit. But I’m sure eventually my wife and four children will come through for me.

Fortunately, over the years, Birmingham has made this burden a little easier. During my fifteen years travelling the world desperately trying to banish the inner blackness by eliciting the laughter of others, just like in Monsters Inc, when I look in my diary and see Birmingham beckoning me, I know she shall open her arms and welcome me back to her ample bosom AKA bullring.

As a young (non-bald) joke teller, when first visiting Birmingham, like many of her temporary admirers, I thought Broad Street was the extent of her charms. And I was admittedly intimidated. The nudity, the drinking, the near riots, which was just the police. But repeated visits have revealed her softer, more vulnerable side. A side I think it’s sad that those who don’t get the time to explore, will ever know of her.

The first indication I had of this was one night after a gig and struggling to the end of Broad Street through the end of times, I found myself in front of the cultural mecca of Cineworld. It was there I sought safety and protection and Vin Diesel movies. Sufficiently emboldened, eventually after a few years, I spread my wings. And one Saturday strolled down the canal. Which was nice.

Each trip has exposed Birmingham’s secrets, as I’ve explored the charming canal-side pubs, pop-up shops in the Cube, Wagamamas. I’ve transversed the maze of building works through the years as New Street station slowly landed from Planet Future. And now, with another trip approaching as Josh Howie’s Messed Up tour comes to the Glee on February 2nd, I hope to finally answer that most elusive of questions as Birmingham finally gives up her greatest mystery. Where can I get a decent breakfast in the city centre? Oh how I’ve wandered on my quest. The miles I’ve put in, as hungover and dehydrated I pulled myself from one shopfront to the next. Every corner bringing hope then profound disappointment as the mirage of a fried egg sandwich recedes, replaced by yet another sweaty kebab.

But in all this time I’ve never given up. Never stopped believing it’s out there. I dream of it. A mythical cafe, within a four-mile walk of the town centre. Yes I want my gig to sell out and to have the audience laugh themselves silly as I tell them of my many many failings as a human being. But that’s easy. Inside, I’ll be yearning for something far more elusive. The full-english. And possibly even brunch.

One thought on “Howie soon is now?”