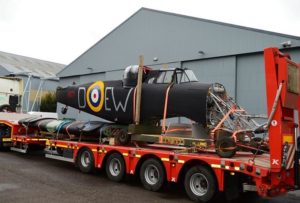 It’s being to look a lot like Christmas at the Royal Air Force Museum Cosford, as the Shropshire attraction has received a rather large delivery in the form of three Second World War aircraft. The Boulton Paul Defiant Mk 1, the Gloster Gladiator 1 and the Westland Lysander III have all been safely transported by road from the museum’s London site and are currently being prepared for display at Cosford.

It is a homecoming for the Boulton Paul Defiant Mk 1, the last surviving example of its kind, built by Boulton Paul at its Pendeford, Wolverhampton factory in 1938. This two-seat turret fighter, operated with mixed fortunes during the Battle of Britain period but found its niche as a night fighter during 1940-42. They were used extensively later in the war for air-sea rescue and target tug roles in the UK and Middle and Far East.

The museum’s example, serial number N1671 was operated by the newly formed No 307 (Polish) Squadron RAF, who became operational in December 1940. It was painted in its all black night fighter colour scheme the following January and carried out 15 patrols before moving to No 285 (Anti-aircraft Co-Operation) Squadron in June 1942, its last operational user. It was originally set aside for preservation in 1944 and spent several years moving between RAF bases for display. N1671 was eventually acquired by the RAF Museum in 1971 and after almost four decades on display at the museum’s London site, the aircraft was completely restored by Medway Aircraft Preservation Society at Rochester Airport in 2009, going back on display at the museum in 2012. Now the sole surviving intact example of its type has made the 130 mile journey from London to Cosford where it will go on public display early in the New Year.

Another new aircraft to wing its way to Cosford is the Gloster Gladiator 1, the first enclosed cockpit and last biplane fighter introduced into RAF service. Although Gladiators saw operational service at home it was most successfully employed overseas particularly in the defence of Malta. At the outbreak of the Second World War, four home based RAF fighter squadrons equipped with Gladiators were sent to France and after just ten days of hard fighting, all the aircraft had been lost. In a desperate attempt to provide fighter cover for the ‘little ships’ involved in the Dunkirk evacuation, a detachment of home based aircraft known as ‘G’ Flight was formed at RAF Manston, Kent. They were quickly deployed to assist with the rescue of more than 338,000 British and French soldiers trapped on the beaches. During the early war years, Gladiators were used by the RAF in several other overseas operations including; Norway, Greece, North Africa and the Middle East.

The museum’s example, serial number K8042 has been displayed at the RAF Museum London since opening in 1972 and this is the first time the aircraft will be displayed at the museum’s Cosford site. It’s not however, the first time the aircraft has visited the Midlands, having been stationed with No 5 Squadron at RAF Ternhill and No 61 Squadron at RAF Rednal, Shropshire in the early 1940s. K8042 was also used for gun trials and experiments, whereby an additional pair was fitted under the top wing, giving a total of six guns instead of the usual four. 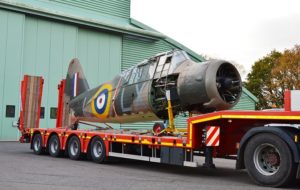 Also joining the aircraft collection at the RAF Museum Cosford is the Westland Lysander III, the only surviving Special Duties variant of this aircraft. It was designed to operate closely with the Army and had a remarkable performance which enabled it to get into and out of extremely small fields. A radical change in Army co-operation tactics meant that its lasting fame is not in this role but as a Special Duties aircraft ferrying Allied agents in and out of enemy occupied Europe. Four Lysander squadrons went to France in 1939 and despite some notable successes the Army Co-operation units suffered extremely high casualties – over 170 Lysander’s were sent to France; only 50 came back. After their withdrawal from France, they patrolled the coastal areas of south and east England as an anti-invasion reconnaissance measure. Late in 1940 they began air-sea rescue duties in the Channel and North Sea – not only could the Lysander spot airmen in the sea and bring surface vessels to them, it was able to drop a lifesaving dinghy and supplies.

The museum’s example, serial number R9125 first became operational with No 225 Squadron in 1940 as a coastal patrol and photo reconnaissance aircraft, based along the south coast of England. It took on the Special Duties role with No 161 Squadron in 1944 and was operational for a further two years until they became obsolete from the RAF in 1946. For a brief period in 1961 the aircraft was placed into storage at RAF Cosford and ten years later it was acquired by the museum and placed on display at its London site, where it has remained until its recent move to Cosford.

The Defiant and Gladiator will both go on public display in the museum’s War in the Air hangar in January 2017, whilst the Lysander will be heading to the museum’s Conservation Centre for an in depth inspection and condition assessment, before work is carried out over the next few years to replace its fragile linen outer skin.

Head of Collections at the RAF Museum, Ian Thirsk said: “It’s been a busy month at Cosford with five new aircraft arrivals. We took delivery of the Bf109 and the Tiger Moth earlier this month and now we welcome the Defiant, Gladiator and Lysander to the collection at Cosford. The Junkers Ju 88R-1, a sub-type of the most versatile German combat aircraft of the Second World War will complete the new line-up and is due to arrive before the New Year. The museum’s centenary plans have provided an exciting opportunity to relocate significant aircraft in the collection closer to aviation fans in the Midlands. In total Cosford will have received six new aircraft in the final few months of this year.”

The new collection of aircraft will enable the RAF’s story to be more comprehensively represented to museum audiences in Shropshire and is in preparation for the centenary of the Royal Air Force in 2018. The centenary plans at Cosford will also include exploring the first 100 years of the RAF, the role it plays today and its future contributions by sharing this story online with a global audience.

Visitors will be able to see five of the new arrivals fully reassembled and in their new display positions by early 2017.Entrance to the museum is free of charge and the museum is open daily from 10am until 4pm. For further information, visit the museum’s website or call 01902 376200.