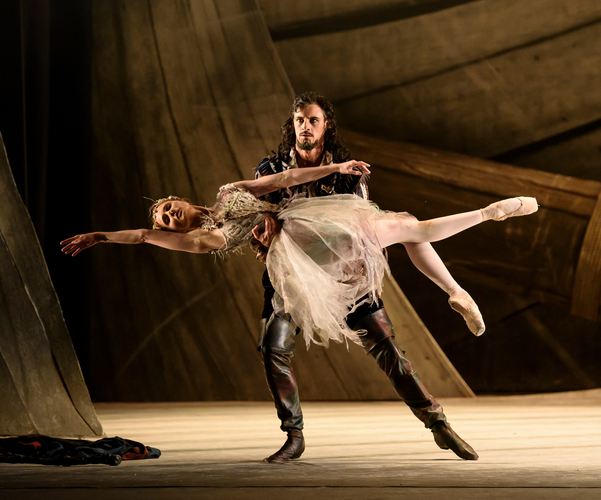 Richard Lutz takes his pew for the premiere of a Shakespeare classic at the Birmingham Hippodrome.

Birmingham Royal Ballet has gone full throttle to celebrate the 400th anniversary of Shakespeare’s death. There are three separate productions on the road hinging on the author’s plays and The Tempest, its world premiere staged this week, is director David Bintley’s major work during this series.

It opens with a startling image – and the visuals are beautiful in this production – of a tiny golden ship, bobbing up and down behind a veil of thin curtains. Ariel, Prospero’s spirit, cavorts below the craft, suspended in air. The fairy creates a storm that brings all those on board to his master’s remote island.

It sets the stage at the Hippodrome perfectly for this play about fathers and daughters, the power of magic and the beauty of open hearted forgiveness.

Prospero (danced by Iain Mackay), the magician and absolute ruler of his tiny island is half pirate, half wary father as he watches his daughter Miranda fall for Ferdinand who has been washed up on shore. Miranda, as light as a feather, played by Jenna Roberts, is a gamine beauty. Mathias Dingma is the androgynous silvery Ariel, only happy when whizzing around the stage and characters. The dancer’s grace is starkly contrasted to its alter ego, the clumsy and dark Caliban, played by Tyrone Singleton.

Unfortunately, the plot is more or less lost without the fundamental power of Shakespeare’s words – the driving muscle of any of his plays. And this is certainly the problem when producing narrative in dance of any sort. The audience has to be well grounded in this Shakespeare play, understand the twists and turns of The Tempest, or else take a real swift look at  the story in the programme before sitting down. Otherwise, like the castaway sailors, they will be all at sea about what is unravelling on stage.

That said, the BRB”s production, which tours nationally after its Birmingham unveiling, is a gorgeous affaIr. Hats off to designer Rae Smith for using flowing fabric as backlit  backdrop that goes from the deep blue of an ocean to the violet of a romantic dawn as Miranda and her lover Ferdinand find themselves alone. And The Royal Ballet Sinfonia only adds to the production with original music by Sally Beamish.

So, in short a good night out – just remember to dust up your Shakespeare before you buy your popcorn.

Until 8th October and then touring. Tickets: www.brb.org.uk