The Godfather, with live accompaniment by The Manchester Camerata Orchestra
Symphony Hall
Birmingham 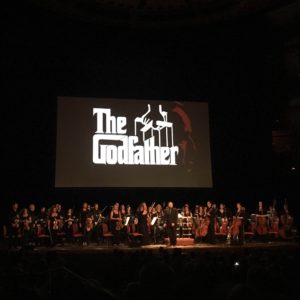 There seems to be a growing tendency for talkie screenings with live musical scoring. Back in the day, it was only silent flicks that received the fleshly musician treatment. Current digital technology makes it easier to use a ‘print’ that excises the original score, allowing an onstage group to drop in their real time performance, noticeably, yet unobtrusively.

This is the key to live scoring. The whole idea is not to be too much of a distraction, but when the audience has shelled out their top dollars to witness a live show, surely they’d like to at least notice the players on some level. It’s a very delicate balance. This is, after all, a movie, and not a gig. Even so, the Manchester Camerata Orchestra were actually arrayed on the stage, rather than down in the pit, the screen suspended from the hall’s high ceiling.

Ultimately, all was well, despite the constant presence of subtitles on the 2008 digital restoration, even though most of the dialogue is in English, albeit mumbly Mafia English, its subtleties matched in with the eternal gloom of the film’s first half. It’s a long stretch, by the way, almost three hours of epic, but thankfully with an old school cinema intermission. Oddly enough, the only portion lacking in subtitles was the brief outbreak of actual Italian dialogue.

Even though, whilst personally experimenting with ignoring the subtitles, a few phrases might be missed, it’s arguable that this is a reasonable sacrifice, if they were to be dropped altogether. Sometimes, even these lines sounded at odds with what the characters were actually saying.

The Camerata weren’t even massively noticeable. That’s how good their interpretation was, seamlessly inhabiting the dramatic subjectivity. The dimness flashed into Sicilian colours for the second half, and Michael Pacino began to fully surpass Marlon Corleone in ruthless body counting. We await Godfather Part Two with keen anticipation!