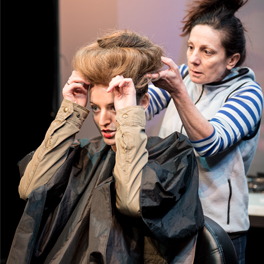 The idea that Stan’s Cafe and the Birmingham Rep have together produced this gentle little play is to be both applauded and relished.

The former is a troupe that has really pushed the boat out for the past twenty years. The Rep has the history and reputation to bring good productions to the city. Their warm hearted studio piece, so simple in theory and so well-handled,  explores  the relationship between a rising screen star and her make up artist as they prepare for an early morning movie shoot. Not a bad idea since the city centre is ringed off by a major film being shot outside the Town Hall as I write.

Quietly, the actress, Kate, reveals her uncertainty about the theatrical and celebrity trade. Meanwhile the make up artist, Sue, uncovers what she has lost by following shoots around the world as part of the technical crews.

Maybe a hint of the issues is in the title. Made Up is fiction, it is cosmetics,  it is a term used to define being happy. The play is a fiction and is the work these two do to entertain us.

Both Emily Holyoake as the young celebrity and Alexis Tuttle as the stylist, have to handle multiple roles as they both explore their pasts. They change quickly from make up artist and actress to that of offhand mothers, truculent daughters, pushy agents or fans.The former has to do this continually sitting in a dressing room chair, like a Becket character. The latter, amazingly, has to switch roles while putting on the slap or re-adjusting wigs.

There is a nice little twist at the end of this 70-minuter. It adds up to a fine play from Stan’s Cafe, which usually stages unsettling and sometimes illuminating plays about big issues. And kudos for the Rep for staging the world premiere and giving it a decent run before it hits the tour circuit.