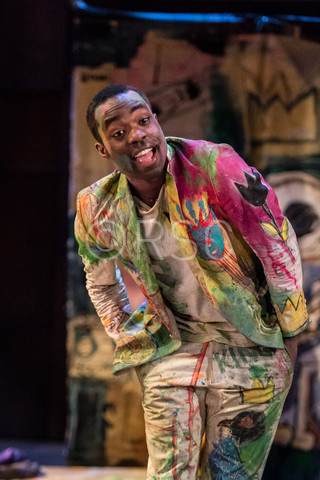 Richard Lutz takes his pew at the Royal Shakespeare Theatre for that most famous of revenge plays.

Hamlet, the indecisive Prince of Denmark, is the man whose need for vengeful action is stopped dead in its tracks after being swamped by doubt.

We’ve all been there. That’s why it is Shakespeare’s leading tragedy. We know what he is going through. There, for the grace of God, go I…

What has made this a stand-out play for the past 400 years, though, is the density of script. Many of the speeches, and Hamlet grabs 37% of all lines, are shrouded in ornate imagery, shaped by beautiful obscurity and shadowy allusion.

To the rescue comes 25 year old Ghanian actor Paapa Essiedu (left). His skill and style allow you to understand more of the long play’s soliloquies than any other production that I have ever seen. In effect, this is the best Hamlet for years.

It is set in an unknown despotic African country, ruled by a strong-arm military man who trucks no defiance and is ready to kill to keep his throne. Hamlet returns from university life in Europe ready to upset this hardline hierarchy to revenge his father’s death.

Essiedu’s Hamlet is cheeky, sarcastic, of our times, boisterous and brimming but full of introspective self doubt. The big speeches, about life, death, or morality are delivered with accomplished  aplomb for such a young actor. He carries this big play on his young shoulders.

Major support from the black cast comes from  Cyril Nri. His chirpy Polonius delivers his speech to his departing son Laertes  not with the usual overbearing tedium of a worried father. But as a light aside. It’s a cute take on a stock character so often lampooned. And his loving devotion to his two children is in stark contrast to Hamlet’s own tortured relationship with his regal mother and his villainous uncle who murdered  to grab the crown…and a queen.

Another top performance is a double role from Ewart James Walters. He is the grim ghost of Hamlet’s father, rising from the hellish gloom in full African chieftain’s garb to warn his son. And later he rises again, this time as a jolly Caribbean gravedigger to lighten the impending tragedy that inevitably and bloodily unfolds.

Director Simon Godwin ensures the musical rhythms of both Africa and the West Indies suffuse and embroider the play. With the sleazy pair of Rosencrantz and Guildenstern, those devious interlopers, played by a fatuous white couple, he throws in an inferred comment about the long distraught relationship between Europe and its old colonies.

Until 13th August at the Royal Shakespeare Theatre, Stratford.