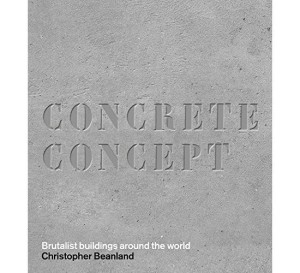 The recent interest in modern architecture shown by the National Trust, famous for preserving stately homes, is a sure sign that the traditional antagonism to ‘concrete’ is on the wane.

Freelance journalist Christopher Beanland, who has long sung the praises of Birmingham’s Central Library has now published a book entitled Concrete Concept in which he chooses 50 of his favourite brutalist buildings from around the world, mostly from Europe and North America but with a handful from South America, Australasia and Africa.

The Central Library is naturally included in the collection. Sandwiched between large-format embossed concrete-effect covers each building is briefly described by Beanland and beautifully illustrated by various photographers.

The book avoids a simplistic definition of brutalism by providing a handy A to Z guide by Jonathan Meades that lists all the main influences, from Aalto to Zapotec. Meades regrets that the shared etymology of ‘brut’ and ‘brutalism’ by which monoglot opponents of brutalist buildings, knowing nothing of ‘beton brut’ and appraised only of the English component ‘brutal’ were handed the ammunition of what seems like a boast of culpable aggression – or maybe not, as the French to whom the pun was clear, have been no more appreciative of their brutalist buildings than the English. Meades argues that brutalist buildings were built when mankind (and architects were mostly men) believed it could take on nature and win.

Half a century ago “…mankind lorded it over the earth”. Perhaps they can be forgiven for their ignorance of the impact of that attitude on the natural environment at the time. The young architects at London County Council, Ron Herron and Warren Chalk who were given the job of designing the Hayward Gallery and Queen Elizabeth Hall may only have been typical of their generation.

However they were also members of the influential Archigram group that predicted a future of throw-away architecture. Meades ascribes some of brutalist’s other problems to its rapid espousal by Harold Wilson (who, coincidentally or not, opened the Central Library). Could Meade’s assertion that this caused “half-witted protest kids to identify brutalism with repressive authority” possibly refer to a young Albert Bore, aided and abetted by a fresh-faced Tony Blair?

The buildings chosen by Beanland truly evoke their period and each have something to say to us today. Basil Spence’s British Embassy in Rome and Le Corbusier’s Palace of Assembly in Chandigargh hint at what the Central Library could have been. Birmingham’s Central Library is (or was) a “great temple” and New Street Signal Box is “solid and exciting”.

I can recall how Oscar Niemeyer’s Palacio da Justici in Brazil’s new capital city Brasilia was admired by the young British architects I worked with in Manchester in the 1960s. Marcel Breuer’s Cleveland Trust [Bank] Tower is “repetitive…but there’s refinement too”. The parallels with Madin’s NatWest Tower are striking – architecturally on a par but misguidedly criticised by English Heritage for being too regimented, it is now being demolished. Breuer’s tower meanwhile was converted into apartments and a Marriott boutique hotel.

The University of Sydney looks like a straight up and down version of the Central Library and has the same coffered floors. Goldfinger’s Balfron Tower has achieved cult status, at least in the metropolis if not in Brum. A cut-out paper model of it bought for me in London for a birthday present, now sits on my bookshelf at home. Preston Bus Station has been listed and looks forward to a new lease of life as a youth centre.

The publication of Concrete Concept coincides with the destruction of one of its subjects, the Central Library – Beanland celebrates whilst Birmingham desecrates. Elsewhere the future of brutalist classics such as Robin Hood Gardens remains uncertain. Beanland pulls no punches.“Any city”, he writes, “that in the 2010s continues stupidly felling 1960s and 1970s brutalist monuments needs its head examining (I’m looking at you, Birmingham)”.