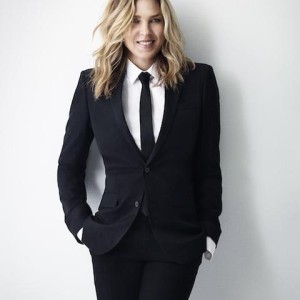 Multi-Grammy award winner Diana Krall apologised for the 20-minute postponement to the start of her Symphony Hall concert, caused she said by a flat tyre on her way to the venue. Fortunately nothing in the Canadian jazz pianist and singer’s performance was deflated as she rolled through a series of re-interpretations of songs from the jazz legends that have influenced her career.

Her gig was only the second on the European leg of a world tour to support her new album Wallflower featuring pop standards from Elton John to the Eagles and 10CC to The Carpenters. But the focus was on jazz as she and her excellent band of Dennis Crouch on double bass, Karriem Riggins (drums), Anthony Wilson (guitar), Stuart Duncan (fiddle) and Patrick Warren (keyboards) began the evening on a swinging note with Bix Beiderbecke’s We Just Couldn’t Say Goodbye.

Explaining that she discovered jazz through listening to the 78s in her father’s record collection, Krall reeled off a succession of wistful reflective numbers, including a delicate version of Louis Armstrong’s Just Like a Butterfly That’s Caught In The Rain.

“I come from British Columbia where if you get three straight days of sunshine you get anxious,” Krall told the packed audience before launching into another Armstrong classic On the Sunny Side of the Street and then returning to the weather theme with Let It Rain by Hal Dyson and James Kendis.

Patter wasn’t Krall’s strongest suit but she was happy to lead the applause for her band, especially Wilson and Duncan for their virtuoso playing in an epic performance of Tom Waits’ Temptation.

Krall’s solo set included gorgeous renditions of Let’s Face The Music and Dance by Irving Berlin and Joni Mitchell’s A Case of You, followed by a medley suggested by the audience that included the first few bars of George and Ira Gershwin’s S’Wonderful . It left you wishing she had sung the whole song.

The Wallflower album was not touched on until near the end of the concert, when Krall got into pop groove with upbeat renditions of the Mamas and Papas’ hit California Dreamin’ and Jim Croce’s Operator, before dusting off Bob Dylan’s title track.

The encore brought a return to soft jazz with Louis Armstrong’s I’ll String Along With You – and Krall ended the gig by paying homage to the musician whom she says in the programme is her biggest influence with a playful version of Nat King Cole’s Frim Fram Sauce.

My companion missed hearing more from the Wallflower album especially Krall’s “superb” renditions of The Eagles’ Desperado and Gilbert O’Sullivan’s Alone Again – and I agreed. The late start to the 90-minute set meant a 9.30pm finish, which just about made it an evening in which you could just head home happy instead of wondering where to go to next.