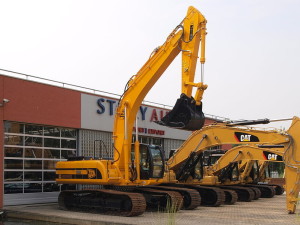 Richard Lutz explains how Midland Tories received £193,000 worth of donations from a construction giant.

Staffordshire digger makers JCB has handed over £193,000 in donations to Tory MPs over the past year, official documents have shown.

The cash details are contained in public papers that list all extra income and sponsorships given to MPs before the stand down of Parliament.

The money can be used for each MP’s constituency party affairs. JCB, one of the largest construction  machine makers in the world, stressed that the money is not income but strictly given to help out Conservative elected members.

The details are listed in The Register of Members’ Financial Interests.

“A main issue is funding of the parties,” he explained. “If there is a lack of state funding, where do the parties get their money from? For Labour, it’s unions. For Conservatives, it is the city.”

“But when it comes to business, it expects a return.”

And that, said Dr Kettel, comes down to a matter of political integrity though he stressed that he did not imply that JCB  offers cash for any kind of specific help from individual MPs.

Donations from JCB ranged from as little as £3,000 to £35,000. Most of the MPs (who have all stood down pending Thursday’s election and are formally ex-MPs) are from areas local to the firm.

The company uses an arm called JCB Research located in Rocester, Staffordshire – near their HQ – to dole out the donations.

Biggest donations went to Nuneaton MP Marcus Jones who received a total of £25,000 from JCB; Burton MP Andrew Griffiths who received £35,000 (which included one specifically from a member of the Bamford family which runs the company); and, Brandon Lewis of Gt Yarmouth who received £20,000. Until Parliament was dissolved, he was Minister of State with responsibility for housing and planning.

A JCB spokesman said all the donations clearly come within Parliamentary regulations and have been legitimately declared by MPs. He said there is no income involved and therefore no MP has carried out work nor attended company meetings.

The donations, he added, are to help with constituency affairs.

He added that JCB has always been known as a Conservative Party backer and has been open about its links. Sir Anthony Bamford was enobled as a life peer in 2013.

MPs who have received donations from JCB Research as of February 2015, according to The Register of Members’ Financial Interests, are all Tory. Here is the list:

Details on all MPs can be found at: