Charlie Harper, the oldest punk in town, any town, talks to us.

Charlie Harper is an absolute one-off. Back in the mists of time he took the UK Subs from London’s punk clubs onto Top of the Pops and now aged seventy he’s still performing with the band, still throwing himself around the stage and entertaining audiences who refuse to grow old.

Are you a national treasure yet, Charlie?

“No, nowhere near. I don’t think I’d like to be. I’m not going to be advertising butter or anything like that. I like to stay under the radar.”

But you are a survivor, and since that halcyon year of 1977 when the band was formed you must have done everything except fly to the moon. Have you got any idea how many gigs you’ve played?

“No, but someone knows. There are a few anoraks out there who collect all these things and our website guys have all the information. It’s not hard to look it up. A hundred shows a year, possibly up to 200 in our middle period, so you’re looking into the thousands, but amongst ourselves we’re not really too concerned with the past. I won’t rule it out though; I was given a box set of our first four albums and I played them this morning.”

Talking of which, the UK Subs are famous for having album titles in alphabetical order. The first, Another Kind of Blues, came out in 1980 and the 25th, Yellow Leader, was released at the start of this year. So there’s just one to go…

“The new one’s been very successful and we’ve been doing a lot of sell-out shows on the back of it. I’ve been writing songs for the final album which is going to be called Ziezo, which in Dutch means ‘job done’.

“After that we’re going to be doing a couple of documentaries then we’ll do stuff like we used to, three track singles, and DVDs. The future’s rolling on and we’ll still do singles, coloured vinyl, that sort of thing but we won’t be doing any more albums.”

One surprising thing is how the original punk bands such as yourselves are still big on the Continent. You wonder what for example a young Italian lad sees in sings about the police from seventies London.

“Yes, we’ll get maybe four or five times as many people at our shows in Europe as we do in Britain. They love it.”

And you must be getting third generation punks now.

“Maybe. I know my grandson is in a band. His name’s Marley Perez, he plays with AMI – look them up on YouTube.”

There’s a big difference between bands like yours, who are still looking to do new things, still walking the walk, and some of your contemporaries, mentioning no names, who’ve gone down the cabaret route.

“Well, er, yes. Mentioning no names… they come out with things like ‘And this is a song we recorded in Berlin in ’77′. We cringe when we’re playing with bands like that. We’re doing a gig in Manchester this week with the Damned, the Upstarts, GBH, the Exploited and you won’t get that from any of them. They’re completely genuine, bam bam, let’s have some fun.”

Jimmy Pursey comes to mind, fronting a band who were massive at the time but a man who was chewed up and spat out by the pop industry.

“Well, we’ve never been a part of the industry. We played with Jimmy back in the day and he just gave it his all, he was up there and he was putting so much into the shows that he almost passed out. It’s hard to describe how intense those gigs were.”

There’s a story that in 1979 you refused to play Glastonbury.

“No, we went there do it and our management, because our album Crash Course was number eight in the charts, said we had a best-selling album so we had to play on the big stage.

“We didn’t care where or when we were playing, we just wanted to play but the management were so adamant, so we didn’t know what was going on, we went off to the pub and ended up being carted off, out of our heads. The police got us and that’s how I got my picture on the front of Sounds.” 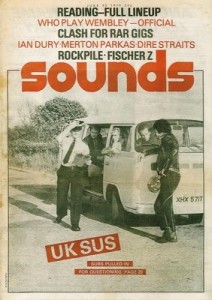 Would you play there now?

“No. It’s all bollocks now, it’s great for what they do but no, we don’t want places like that. High stages and fences, no thanks. We’ve played 20,000 crowds but give us physical contact. We’re still human.”

UK Subs play the Robin on Thursday 14th May. www.therobin.co.uk