A friend from the States writes to me: “I didn’t realise there was an election soon. Whuzzup?” 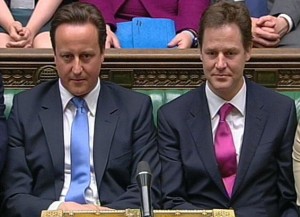 Well, for one, check this out: the guy who tried to get Scotland to go it alone last summer may…just may… become the second most powerful politician in Britain come the national election next month.

So, there’s one for the books in a vote that no one can predict. As opposed to the usual two party bunfight between the rightist Conservatives and the mildly leftie Labour, there are now five other parties which can play a hand in Britain’s future in 37 days time when voters go the polls.

This is how it plays out: both the Conservatives and theIr ideological enemy, the Labour Party, each grab a tad more than 33 per cent in the flurry of surveys that constantly crowd our lives.

That’s two-thirds of the voters tied up. The other third are divvied up by a ragtag collection of parties and interests. And all could play a part in a future coalition or partnership with the two big beasts.

First, there is the Scottish Natlionalist Party (the SNP). Despite losing last September’s referendum on independence, its popularity is at an alltime high. It currently has 6 MPs in Parliament. Polls suggest it could grab up to 50 – mostly at the expense of the Labour Party which historically depended on a guaranteed backing north of the border. Labour presently controls 41 of 59 Scottish seats.

Some polls say the SNP will take 40 seats in Westminster. And one of those new MPs might be the man who until recently led the forceful independence campaign, Alex Salmond.

If a Labour faction does not have an outright majority come May 8th, the SNP will have significant bargaining power despite Labour leader Ed Miliband promising there would never be a formal coalition with separatists. But there can be more informal agreements and the two parties could combine efforts. If Miliband becomes Prime Minister, Salmond could become his deputy with the aim to, as per usual, grab more power for Scotland and its oil. In effect, the second most powerful politician in the UK will a seasoned Scot who wants to break up the United Kingdom.

Another party that is making waves is called UKIP. It exists to wrest Britain out of the European Union though its boss, Nigel Farage, picks up a pretty penny as an elected politician to the EU. Its other plank is immigration and many of its white working class backers conflate this with the issues of race.

What UKIP has done is to force the Tory conservatives to lurch rightwards over immigration and make Labour wobble a bit too, to keep its blue collar vote. UKIP will be a force come the next Parliament, though many say a malevolent force.

Other minority parties that will confuse the new landscape include the flailing Liberal Democrats (the Libdems). They are currently part of the present fading coalition with the David Cameron Conservatives. At one time, polls had them being backed by up to 30 per cent of voters because of the initial televisual likability of their leader Nick Clegg. Today, they are bracing themselves for getting swamped at the election with many historic backers angered at the Libdem collusion with a Tory partner keen on public sector cuts and controversial privatised reforms in education and health.

The Greens could play a part too. It currently has one MP and a growing interest from the under-30’s who are fed up with Labour. But it has a leader in Natalie Bennett who is renowned, unfortunately, for one mistake. A month ago on a radio phone-in, she froze, forgot her own party’s take on issues and could not answer fundamental questions. She blamed her brain-blank on having a cold, which compounded her public image troubles.

To add to this potpourri of possibilities are the mega-minor parties which could have just a handful of MPs but play a part too: the Welsh nationalist Plaid Cymru, the hard-nosed Northern Irish contingent and one or two single issue candidates that can eke through because of local concerns such as the state of the free health service or the doubtful morals of a seedy sitting MP.

All in all, it adds up to a real bunfight come election night and the succeeding two weeks after the election. Britain is getting used to seeing the back of a two party system. Things are fragmenting. As the Chinese proverb goes: “Darlings, we live in interesting times..”

4 thoughts on “Britain and its fragmented politics”