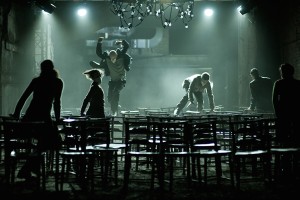 After celebrating a record-breaking autumn season in 2014, and receiving a UK Theatre Award for achievement in dance for International Dance Festival Birmingham 2014 (co-produced with Birmingham Hippodrome), the Birmingham-based dance house DanceXchange has announced another exciting dance programme for spring 2015.

From flamenco to hip hop, visceral contemporary to evocative dance theatre, DanceXchange will present the cream of UK dance performance in The Patrick Centre, Birmingham Hippodrome from 4th March–16th May 2015.

David Massingham DanceXchange’s artistic director said: “Our spring dance programme opens in March riding high after the popular and critical success of last season, which saw some of our biggest audiences at The Patrick Centre. We continue to build on the success of International Dance Festival Birmingham and once again present a diverse line-up of performances for the ever-growing Midlands’ dance audiences. This is an important season which maintains the interest in contemporary dance as we are already planning and working towards IDFB 2016”

Kicking off the season is 2Faced Dance with Dreaming In Code from 4th-7th March. Award-winning choreographer Tamsin Fitzgerald and Eddie Kay (Frantic Assembly) present an explosive, visceral, brand-new double bill performed by one of the UK’s most innovative male dance companies. Featuring a breath-taking collision of kinetically charged dance and theatre, with music by Tony-Nominated composer Alex Baranowski, 2Faced Dance explore what the future could look like in this powerful and fearless work.

As part of a celebration of the work of groundbreaking artistic director and choreographer Charlotte Vincent, Vincent Dance Theatre presents 21 Years/21 Works on 18 March. Three thought provoking experiences, live, on film and online, combine to create one unique evening. UnderWorld is a powerful, atmospheric ensemble performance which draws on the myth of Orpheus & Eurydice and VDT’s seminal production Broken Chords.

The physically punishing choreography is performed in a loop that visually transforms the space over and over again through a series of striking cinematographic images and intimate, moving vignettes, with audience members able to enter and exit at any time during each session.

Simultaneously an Archive a nd Engagement Space will provide an opportunity to explore and respond to images, sketches and videos from VDT’s past productions, exploring female performance practice and issues of gender equality. Audience members can also view absorbing dance theatre film Glasshouse, conceived and performed by Charlotte Vincent and Forced Entertainment’s Richard Lowdon and made with filmmaker Robert Hardy.

On 26th-27th March Igor and Moreno bring Idiot-Syncrasy to the Patrick Centre. Full of unexpected variations, the piece involves two radically different – though physically similar – performers, accompanied by a hypnotic sound track and live singing. Reinterpreting Sardinian and Basque folk traditions from a contemporary perspective, this fun and energetic piece is a tender exploration of male identity and relationships.

The sounds and heat of Spain come to Birmingham on 6th & 7th May. Ana Garcia’s Flamenco Edition ’15 presents flamenco star Jesús Fernández and his production of Cádiz. In the piece, the award-winning Fernández portrays his personal reflections on his Andalucian roots. A nostalgic view of the flamenco dancer’s home town, its walls, a walk through Cádiz, its beaches, its light, mystery and past.

The spring season draws to a close from 14th–16th May with Fuel and a work entitled The Spalding Suite. Conceived by Inua Ellams, and directed by award-winning hip hop luminary Benji Reid, The Spalding Suite is a new physical theatre show inspired by the UK’s basketball sub-culture. Six dynamic performers mix live beatboxing, hip hop, music, moves and poetry, taking us from the fleeting high of the score and the robust camaraderie of the team, to the poignant lows of a body too worn to play the game.

Fresh poetry is combined with contemporary movement celebrating the elegance and beauty of basketball. Seen from a British perspective, The Spalding Suite gets to the heart and soul of the gravity-defying game and delves into the hopes and dreams of those who play it.