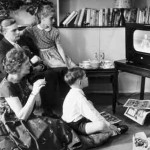 Richard Lutz dives into the muckspreader of TV movies to emerge with one of the best gross out classics of the planet, ever (maybe).

An old friend of mine was walking through the campus of the University of Oregon many decades ago. He spotted a statue that he had never seen before. It was a sculpture of a thoughtful man and under it was engraved: ‘Knowledge is Good.’

Hmm, he thought, never stumbled across that before.

He forgot about it until a year or two later when he saw it in the film Animal House (Thurs,  Sky Movies Select, 12.50pm). The college was the location set for this 1978 college caper whacko funfest.

There, what a nice way to begin this piece about this very funny, very naughty and very gross film about an early sixties American frat house that the autocratic dean wants to shut down because its members are… well, too naughty, too gross and very funny.

That’s about the bones of the plot really. But what really makes this 37 year old movie stand out are the young actors, all playing dissolute down and dirty college boys who went on to carve good solid careers: John Belushi (RIP), Tom Hucle, Kevin Bacon, Tim Matheson, Peter Reigard, Karen Allen (well, not really one of the guys) and  old-timers such as Donald Sutherland, John Vernon and Verna Bloom.

Plus writing credits from Harold Ramis (later of Ghostbusters) and directed by John Landis (Blues Brothers, Coming to America, An American Werewolf in London). So, a good backbone of comedy talent, all, some would say, totally wasted on a campus gross out movie.

Weeeeellll, yes, in a way. But it makes you laugh. And one reason it may have proved so popular was that Landis was under thirty when he directed it so he knew the audience
This, rather than an old hand who had no idea what baby boomers really laughed at.

To illustrate this generation gap, middle aged actor Donald Sutherland had a bit part. He thought the script was dire and when offered a cut of profits or $75,000, he took the cheque. He missed out on a $3 million pay out.

Of course, one of the skyrocket stars was Belushi – a comic who burned fast and furious. He was still recording Saturday Night Live in New York during the schedule so had to fly cross country twice a week to fit Animal House into his life. Maybe that was one reason he overloaded on drugs. Too much, too frantic. 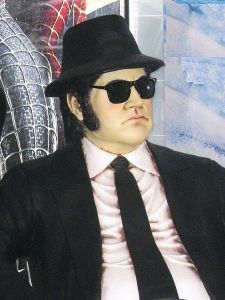 Jake (or is it Elwood?) Blues

But if one thing could be gleaned from the actor’s Animal House effort, it has to be his downtime nights out. Belushi loved live music and, in Oregon, ran across a blues harp r’n’b bluesman called Curtis Salgado. He inspired Belushi to form the Blues Brothers with Dan Ackroyd.

And if that name doesn’t ring a chord or two, you must have lived on the Planet Koozbane for a bit too long.

3 thoughts on “Screengrab: Down and dirty with Belushi”