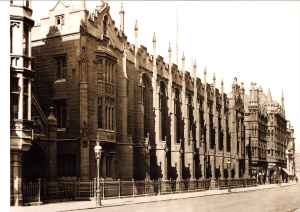 It was always going to be an uphill battle to save the Central Library in a city whose leaders have long destroyed its best buildings in the name of progress. A city that was proud, it seems, to have demolished the grammar school in New Street (above) designed by Pugin and Barry and replaced it with a nondescript office block to which nobody gives a second glance. When no property developer wants a building it’s left to rot until there’s no option but to pull it down. The Town Hall was left empty for years and could have been in danger until the council got the money to repair it from the National Lottery but the less prominent Golden Lion in Cannon Hill Park and Moseley Baths are still on death row waiting for a last minute reprieve.

When I began my campaign in 2002 to keep John Madin’s Central Library from the bulldozers I had no illusions about its likely success. When Councillor Ian Ward announced that the “concrete monstrosity” was “crumbling” and would be demolished he didn’t expect much opposition. He could trade on the hatred of 1960s concrete architecture that had been skilfully nurtured by Prince Charles whose quip about “books and incinerators” would be repeated many times by the council to bolster its case.

Twelve years later, the building still stands as strong as ever, its impending demolition only justified now by the rapacious demands of the commercial property industry and Argent plc whose formed boss Gary Taylor once confessed that he was driven by a boyhood hatred of the building. Now on the verge of seeing his wish come true Taylor is conspicuously absent as are former city regeneration boss Clive Dutton and former council leader Mike Whitby. Even the city’s librarian who condemned his own library to death is to retire in 2015. Only the instigator of the Paradise Circus project, Sir Albert Bore, survives with the power to order its execution.

Despite having royalty on its side the council was given a good run for its money over the last twelve years. English Heritage recommended listing on two separate occasions and the ministerial decisions against listing were fiercely contested. Margaret Hodge had to admit to Ed Doolan on Radio WM in 2009 that she had more letters in support of listing than against, but was swayed by the Commission for Architecture and the Built Environment (since abolished). It was also well-known that she hated concrete.

The Twentieth Century Society joined the campaign in 2003 and Friends of the Central Library was formed in 2007. A book on John Madin, sponsored by English Heritage and the Twentieth Century Society (written by Alan Clawley) was published by the Royal Institute of British Architects in 2011. The World Monuments Fund put the Library on its list of endangered species along with Preston Bus Station (since listed) and the South Bank Centre.

The Library Story has been chronicled in the pages of The Stirrer and its successor The Birmingham Press. Numerous articles have been written in the national press and interviews given on radio and TV. None of this cut any ice with Birmingham’s Councillors If the concrete muncher does start its work in February those of us who mourn the Central Library’s passing can at least say that we tried our best to preserve an important piece of Birmingham’s architectural history.

4 thoughts on “No stopping the vandals”