There’s an interesting night coming up for jazz lovers. 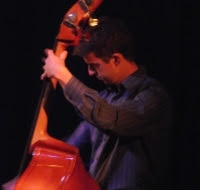 The starting point for the music is collective improvisation but compositionally it draws on as wide a range of styles as possible. Folk, electronic music and contemporary classical influences are added to the mix with complex jazz harmonies and rhythms. Often the music has been rewritten many times after rehearsals sent the music spinning off in different directions. Most of the material is through-composed with the themes re-emerging in different forms, different keys, or time signatures.