Rally will feature models of the world’s great planes. 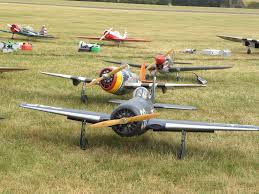 Intricate models of some of the world’s most iconic aircraft will be taking to the skies over Shropshire this month for a weekend of flying entertainment. Model enthusiasts from across the country will travel to the Royal Air Force Museum Cosford for this famous air show in miniature.

Taking place on Saturday 19th and Sunday 20th July, the Large Model Aircraft Rally at Cosford is an absolute must see for any aviation enthusiast. This annual event is set to attract in excess of 10,000 visitors over the two day show and will be one of Shropshire’s biggest events this summer.

Many of the models have taken years of dedication to build and apart from the obvious difference in size, they look just like the real thing. This year’s theme will celebrate 100 years of aviation and will see the largest formation of First World War aircraft on display at any air show. Dave Johnson, event organiser and Chairman of the Large Model Association said: “We have employed a professional pyrotechnics company who will be bringing to life a First World War battle in the air on the Saturday afternoon to entertain the crowds. On Sunday the entertainment will continue with a World War Two model aircraft formation descending on the airfield, supported by special effects. We are confident that this year’s spectacular show and mass aircraft formations will be popular with aviation fans.”

Models on show will range in size from small scale aircraft right through to a huge 1/5th Scale Avro Vulcan with 4 jet turbines, making its second appearance at the annual event. Famous for its delta wing shape, the 1/5th scale mighty Vulcan bomber will conclude the weekend’s entertainment with a spectacular flypast.

It’s not just modellers who will enjoy the Large Model Aircraft Rally, other activities keeping the whole family entertained throughout the day include: a children’s entertainment area; trade and food stalls selling everything from modelling equipment to hot snacks and refreshing drinks. Plus, visitors will have access to the RAF Museum where they can see many of the aircraft flown during the show in full size.

Anyone wishing to attend the event can save money by purchasing tickets in advance at a discounted rate. Advance tickets are on sale at the Museum, priced at £8 for adults, saving £2 per person on the gate price and children under the age of 16 are free. Gates open at 8.30am and flying starts at 9.00am.

Exclusively for the Large Model Aircraft Rally, visitors are able to camp on site. Camping, including entrance to the show both days, is £45.00 and visitors interested in camping should contact Dave Bailey for more details on 07827 675665 or email dave.bailey08@tiscali.co.uk.

For further information on the event and how to purchase advance tickets, call the Royal Air Force Museum Cosford on 01902 376200 or visit the museum website at www.rafmuseum.org.