Music and theatre are on offer.

An ex-student from North East Worcestershire College is looking forward to seeing her work come to life in FishHead, an upcoming theatre production at Artrix. 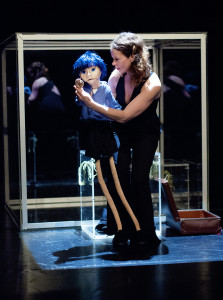 Karen Johns, who is now a costume designer and puppet maker for Reaction Theatre Makers, worked for many years in Graphic Design before having children. “As a single mum of two, it was a struggle to find my way back into working in the Creative Arts. So I enrolled on a Theatre Costume course at Inkberrow Design Centre, through North East Worcestershire College. It was a turning point in my life. I was soon creating costumes for The Roses Theatre in Tewkesbury, and Everyman Theatre Cheltenham and from this I began work as Costume Designer/ Maker for Reaction Theatre Makers.  For FishHead, our latest touring piece, I was asked to make a ventriloquist puppet!”

With a cast of three, a Perspex set, and a great soundtrack, this highly visual piece is an original story that moves and uplifts. Tom and Lydia met by the sea where all the best stories start. An oyster fisherman walks out to sea. A ventriloquist sits on the beach with her dummy. All of the action takes place around/inside/under/on top of a pristine cube of beautifully lit Perspex. Suited dancers seamlessly transform the cube from caravan to boat to cliff top, punctuating the action with fresh choreography.

Music plays a significant role in shaping the tone of the evening featuring some carefully selected tracks which serve to elevate the emotional intensity of key moments. The overall effect is mesmerising play. The combination of the atmosphere, an emotionally charged script and fine performances from all concerned, delivers a powerful and moving experience.

Reaction Theatre Makers are a collective of Midlands-based artists creating innovative cross-art visual theatre. Reaction have collaborated with Worcester University, creating a series of dance sequences that slot into the piece, a collaboration Reaction is keen to expand with other Performance  and Dance students from other Universities and Colleges. Reaction is dedicated to developing young artistic talent and generating audiences.

Time to boogie on down and the seventies when The Real Thing perform at Artrix on Friday 9th May. Unforgettable hits such as You to Me are Everything, Can’t Get By Without You and Can You Feel the Force were all million-selling hit singles and the band still have a massive following.

Britain’s number one soul band are now celebrating an incredible forty years in the business. The three original vocalists, Chris and Eddie Amoo and Dave Smith, together with their five piece band, are looking forward to performing all their hits and are sure to get the audience singing along.

Babajack ares fast becoming one of the most sought after bands on the blues/roots/acoustic circuits in the UK and Europe. They combine great musicianship, passion, energy and charismatic performance to create a great show which is coming to Artrix Studio on 10th May. 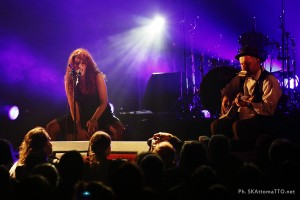 Becky Tate and Trevor Steger are the song writing core of BabaJack.  What sets the duo apart is their approach to blues: their music is recognisably infused by early blues, but by no means bound by it.  Becky brings roots/ funk/African rhythms and her beautiful lyrical voice, and Trevor delivers a unique blend of punk meets Ry Cooder using slide style guitar and harmonica.  In the tradition of the early blues, they make their own instruments: Trevor’s homemade growling ‘WineBox’ guitars and Becky’s cajon (box drum) and stomp.

Their latest album, Running Man was released on 7th October 2013, and is listed amongst the top albums of 2013 in Classic Rock, Classic Rock Blues and Guitar and Bass magazines. Musicians joining them on the album include Tosh Murase on drums, Adam Bertenshaw on bass and Julia Palmer Price (cellist for Nigel Kennedy) on cello.

Babajack are performing at Artrix Studio on Saturday 10th May at 7.30 pm. Tickets are available at £12.50