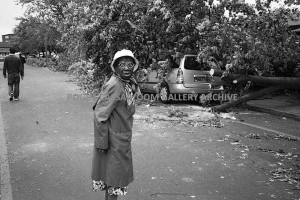 Photographs and talk by Pogus Caesar on behalf of Friends of Birmingham Museum & Art Gallery.

Do you remember the Birmingham tornado? If you did, you know where you were – at work, school, in the house, on the bus, somewhere you shouldn’t have been.

Photographer Pogus Caesar, who has written about and filmed the city for years, has collected his own pictures from that instant back in 2005.

Now he has a screening and talk about that day, based on his archives  (see below for details) that graphically reveals what he saw through the lens. Here’s what he has to say:

“At  2:30pm on the afternoon of the 28 July 2005, I was in my car about to turn into Alcester Road, Kings Heath. Suddenly there were thunder claps, lightning and torrential rain. Then very quickly it went dark… very dark.  Sparkbrook, Kings Heath, Moseley, Balsall Heath, Small Heath, Quinton and Hall Green were hit by the force of a tornado rated at T3 – T5. That meant wind speeds of between 93 to 130 miles per hour.

“It only lasted  minutes. It sliced a kilometre-long path though the neighbourhoods. Terrified residents saw roofs flying through the air, cars lifted and thrown through windows, 1000 trees uprooted by the ferocious winds, demolishing everything in its path. There was extensive damage to buildings, vehicles and the local community.”

In the aftermath, hundreds of people were trapped in their homes and isolated from  families. The total cost of the damage was estimated at £40 million. Emergency services cordoned off many roads and prevented access to damaged property. 30 people were injured, there were no fatalities.

In the midst of the chaos, I made a record of the unfolding events and took 300 black and white photographs documenting the aftermath of a violent tornado and the staggering footprint of destruction it left on a shocked community.’

For tickets, email melissa.page.fbmag@gmail.com. £9 for members of the Friends; £12 non-members.

One thought on “Pictures from The Birmingham Tornado: Exhibition”