We talk to the legendary Gerry Marsden about his new tour and the early days of Merseybeat.

From the beginnings of Merseybeat over 50 years ago, through his re-emergence as an actor and TV presenter to his current hectic touring schedule Gerry Marsden has remained a popular figure, albeit one whose contribution to the history of British music is often overlooked. There’s certainly more to Gerry than You’ll Never Walk Alone, as he told us during his current tour, Gerry Cross the Mersey. 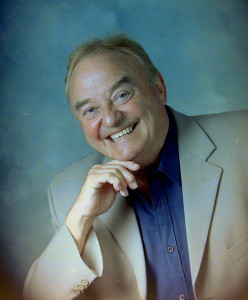 “The tour’s been great. Tamworth was chock a block, lovely people. I really enjoyed it.”

The shows are a bit different from the usual concerts you play.

“I chat, tell a few little stories about my life and so on, then the second half is the songs. We have a bit of a laugh, we still play all the songs but there’s a bit more talk than usual.

We talked last week about how certain cities have provided the right setting for a music scene that has gone on to change the world. Liverpool in the early sixties was obviously one. Could what happened there have happened anywhere else?

“Being a sea port you had sailors from all over the world and when we were kids we’d stand outside the pubs on the dock road and listen to all these different kinds of music. That’s where it all started, then Lonnie Donegan came on the scene and showed us that all you needed was three chords so we were away. And it took off; there was something like 300 bands in Liverpool at one point.

“Newcastle had some good bands, so did Glasgow – they were big ports as well. But the biggest thing we did and the thing that really helped us all was going to Hamburg. That was a great apprenticeship – on stage from seven in the evening to 2am. We told everyone else to go over there and that helped them.”

What also helped the music scene in Liverpool was that it had a great entrepreneur in Brian Epstein.

“Brian, God bless him, sold records inside his furniture shop. He knew nothing about the business and we asked him for these records, Fats Domino, Ray Charles, Jerry Lee Lewis and he asked us why we didn’t want the British bands? I told him it was because Cliff was a nice lad but we just didn’t like his music. Then we came back from Hamburg and he told us that he’s signed the Beatles. I was amazed, because he still knew nothing about the music business but he said this was his forte and could he manage us? We shook hands and it went on from there.”

Because of You’ll Never Walk Alone, Ferry Cross the Mersey, the fact that you’ve stayed in the area and all the work you’ve done with local campaigns, you’re the singer who’s still most synonymous with Liverpool.

“I enjoy it. I love the people and the city, and I love doing what I do. I go on the ferry as much as I can. When a record company or a TV crew from America come over and ask me where I want to be interviewed I always say ‘On the ferry.’ And they’re made up, they get on the ferry, my record’s playing and that gets them as well. There’s a lot of money been spent and a lot of work done on Liverpool so it’s a pleasure now to ask people to come up and see what it’s like. In the old days I’d say to anyone coming to the UK, go to Liverpool for a day to see the music scene and then go somewhere else, but now you can stay for weeks.”

Do you feel that others who came from Liverpool could have done more for the city after they became stars?

“I do. I was disappointed when the Beatles went to live in London, but I knew they had to go for their own reasons. It worked for them but there’s other bands who went and did nothing and I think to this day that Liverpool needed us. Then later on, some of the people who moved away distanced themselves from the city.”

You mentioned the Beatles there, and the obvious one is Paul McCartney. He’s left a great legacy in terms of his music and he’s probably one of the richest men in the world, but the downside must be that he can’t leave the house without it’s a media event. You’ve had a good career, but I would imagine you can still have a quiet life when you choose. On reflection, have you got the right balance?

“I think what I’ve got is great because people walk down the street and they say ‘Hello Gerry, how are you?’ but they don’t try to rip my clothes off. I used to enjoy that… If you want to be famous though, that’s what happens, and all the money that comes with it. I wouldn’t mind a couple of his millions but it’s got its price. Like Michael Jackson – what a talent. I used to love watching him, we got him to do a show at Aintree racecourse and he was absolutely incredible but it was very sad how he wanted to change his whole image, his whole self.”

You come on stage, you do the big songs that everyone expects. Do you ever feel like going on and playing an hour of the music you love, the rock’n’roll and blues you were brought up on?

“I’ve done that once – it died on its arse. The crowd were all saying ‘We want Ferry. We want Walk Alone…’ One night I tried it. Never again.”