Senior politicians have warned that the dire weather Birtain has endured has been caused by foreign weather patterns allowed to cross our blessed borders because of relaxed immigrant laws.

Michael Gove, Eduction Secretaty and chief Euro- doom-monger told me over a very British meal of eel-pie, whelks and chips washed down by honeyed mead: ‘There is little doubt the bad low pressure storms are linked with the relaxed immigration policy foisted on this island by  Euro-gang which we are part of… but not really.’

He said the high tides were Bulgarian. ‘They originate in  the Black Sea region of the world as we know it.’ he explained downing another plate of lamprey and swan, ‘And as for the rain, it is Romanian- all  you have to do is see the way it overwhelms our skies.’ 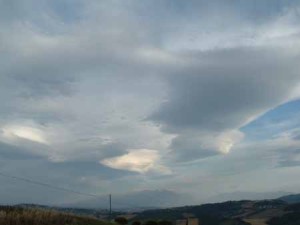 He named a list of countries he thought were part of the Weather Conspiracy. They can be found on Lowpressure.co.uk. and include any states where black leather jackets are an integral part of the national dress code.

‘The only way to improve our glorious weather which should shine all the time on rolling hills dotted with orchards and trimmed by manicured hedgerows is to get out of Europe, teach our boys and girls about all the great bits of history linked with the Empire and watch which undomestic foreign weather patterns try to storm our borders.’

‘By the way,’ he added, ‘as a Scotsman-albeit a dorky-looking one- I too may be a foreigner when my fellow haggis eaters vote for Independence. And that tears me up.  But at least we’ll get less tartan rain and mist inside the M-25..’

Phil, a third hand car dealer from Yorkshire (which is part of England), added: ‘Send all Lancashire folks back to wherever the bloody hell they came from. Except for Freddie Flintoff because he was damn good on the cricket pitch even though he wasn’t middle class.’

*This website disassociates itself from any comments made by our interviewees.

One thought on “Howard: Britain Rocked by ‘Immigrant’ Weather”