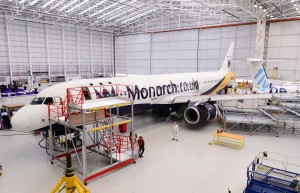 Birmingham Airport’s international status was further boosted today by with the opening of a new multi-million pound maintenance hangar. The 1110,000 sq ft facility, owned by independent aircraft maintenance Monarch Aircraft Engineering Limited, will see up to 300 new jobs created at the airport. immediately creating 150 new jobs, also has the potential to add a further 150 posts.

The new facility can accommodate almost every aircraft type in its two bays, incorporates industry-leading design and build standards, and is one of the first to have the capacity for Boeing 787 Dreamliner maintenance, with sufficient capacity for other wide body aircraft, such as the Boeing 777, 747 and Airbus A350.  It is large enough to accommodate two Boeing 777-300ER aircraft or 10 narrow-body aircraft and will contain a number of component-repair and back shops. The vast building, covering c2.5 acres is big enough to house four full size football pitches, 2400 Minis or 450 double decker buses.

In its first month of operation, seven different aircraft types are scheduled for maintenance in the facility, including Airbus A300, A320 and A321, Boeing 757 and 767, Embraer 195 and Bombardier Q400.

The Birmingham hangar will enable MAEL to service a greater share of the growing market for aircraft maintenance service in the UK and Europe. Its own third-party (i.e. non-Monarch Airlines) maintenance activities have grown to 31% of business in 2013 from 18% in 2010, and over the next two years this is planned to increase to almost 40% of turnover. This will consolidate MAEL’s position in the top 10 largest airframe MRO organisations in Europe.

The new facility will ensure the continued growth of MAEL’s highly regarded apprenticeship scheme, now in its 42nd year.  More than 700 apprentices have been through the scheme since its inception.  Not only does the scheme help create jobs in the local community, it also provides an essential pipeline of skilled aircraft engineers for MAEL and the wider industry.

Commenting on the new MRO facility at Birmingham Airport, Mick Adams, Managing Director of MAEL, said: “Today is a real milestone in the growth and development of MAEL as we officially open our tremendous new state-of-the-art engineering hangar at Birmingham Airport. The hard work and dedication of the whole team involved in this project has been outstanding and has allowed us to ensure it has opened on time and most importantly, within budget.

Paul Kehoe, CEO of Birmingham Airport added: “Today’s opening is a major development for Monarch Aircraft Engineering, Birmingham Airport and the Midlands region as a whole. Opening this state-of-the-art facility in Birmingham underpins Monarch’s long-term commitment to the region, creating job opportunities for skilled engineers and young people looking to start a career in aircraft maintenance. We look forward to welcoming the arrival of new aircraft and airlines flying into Birmingham specifically to benefit from this world class facility.”